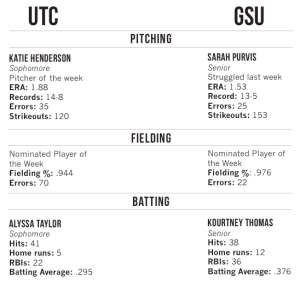 After finally finishing up their non-conference road swing, the Georgia Southern University softball team will face off against the University of Tennessee at Chattanooga in their second to last conference series of the regular season.

GSU still remains No.1 in the Southern Conference by a decent margin, but UTC is currently second in the rankings and is looking to give GSU a run for first place.

The Eagles just finished up playing two talented Southeastern Conference schools, and the Mocs, coming off of two non-conference victories, are looking to take advantage of that.

An area that the Mocs might show the upper hand is in the circle, believe it or not. For the Eagles, senior pitcher Sarah Purvis did not display her best performance last week, committing 10 errors.

On the other hand, UTC’s starting sophomore pitcher Katie Henderson was just honored as SoCon Pitcher of the Week after her weekend performance.

While UTC is looking for Purvis to make errors, GSU will be looking for the Mocs’ frequent problem with fielding errors. Both of these teams have areas that could need a tune up after this long season, but, at this point in time, the Eagles are looking stronger all-around and especially when it comes to batting.

GSU has won two consecutive SoCon championships and they are currently on top of the SoCon. This team is seeing such success because they have talent well beyond what is typically in the SoCon for softball. A perfect example of that talent is senior infielder Kourtny Thomas. Her statistics crush almost every opponent and almost every game she performs to lead or help the team.

Coming back to Statesboro for this series is a large advantage for the Eagles that are fresh off of the road. Head Coach Annie Smith saw the games against the University of Alabama and the University of South Carolina as bettering experiences. She felt that those teams had excellent pitching and fielding, which, in turn, will only make the Eagles a better team.

The Eagles will begin their series against UTC with a doubleheader on Saturday at 1 p.m. and 3 p.m. and will close the series on Sunday with the final game at 1 p.m.