Fritz era in full swing with Blue and White game 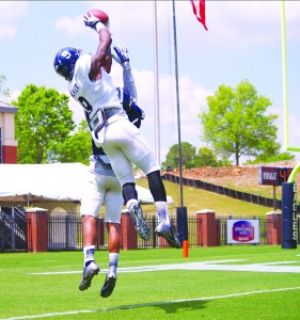 The defense controlled the flow of the game as their well-timed reads gave up only three touchdowns and 393 yards in 102 plays.

“Coach wants our defense to be active next season,” Jackson said. “Forcing turnovers, interceptions, fumbles [and] really getting pressure on the quarterback.”

Junior running back James Dean saw time at multiple positions Saturday, capping off a solid performance with a 4-yard touchdown from transfer sophomore quarterback Favian Upshaw. All four quarterbacks saw action, with both Upshaw and Vegas Harley recording a touchdown.

The Eagles’ run game looked solid when given space, as running backs Antonio Williams and Dennis Pritchard averaged 5.1 and 6.9 yards per carry, respectively.

“Our running game has a chance to be explosive next season,” redshirt freshman Chaz Thornton said. “The defense is faster and stronger this year, which pushes [the offense] to be even better.”

There was one injury early in the day as Jackson Morris, redshirt offensive lineman, left the field on a cart. Head coach Willie Fritz thought Morris suffered a dislocated knee.