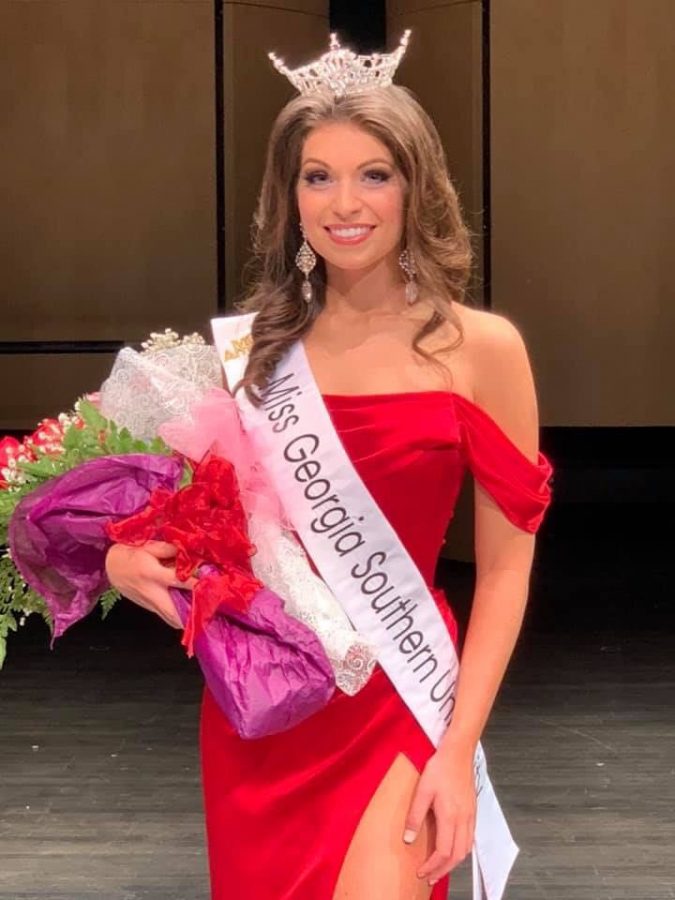 “Through the process of learning more and more about Georgia Southern to be able to give tours, it is impossible not to fall head over heels for this University,” DeLoach said. “Each and every ambassador has the same passion for Georgia Southern, and being surrounded by sixty students with a true blue spirit have provided me with a special family at my second home.”

DeLoach is in her final year at GS, and in her on-stage question, she mentioned that this campus is like her home. This was DeLoach’s first time competing in the Miss GS pageant. While she has taken a bit of a victory lap in college due to her two majors, DeLoach never had the time to compete in Miss GS.

“It truly feels like a dream,” DeLoach said. “I’ll have two undergraduate degrees in 5.5 years so it’s safe to say I love Georgia Southern … It’s surreal that I’ll represent my favorite place on Earth during the last year.”

During the evening wear competition, contestants also spoke about their social impact statements. DeLoach’s personal platform is “A Heart for Mentoring: Helping Others Reach Their Full Potential.”

DeLoach shared that mentoring is her passion and something she enjoys daily while working as a dance instructor at Jennifer’s School of Dance in Glennville, Georgia.

“I’ve been immensely blessed to have the opportunity to use my gifts to mentor others,” DeLoach said. “I would love for so many other college students to be able to experience those same blessings. I want to leave an impact on Georgia Southern this year, and I would love to do that by creating something of a mentoring network between Georgia Southern and local Bulloch County schools. While I don’t know what that would look like yet, it would be a dream for Georgia Southern students of all majors to be able to use their interests to impact and encourage kids in our local schools.”

Not only did DeLoach win the Miss GS title, but she is the recipient of the evening wear and talent awards. DeLoach tapped to an upbeat song, “Sing” by Pentatonix, for the talent portion of the competition.

Among the other seven contestants, talents ranged from lyrical dance to vocal to speed painting to hand-written spoken words.

Miss Congeniality was awarded to Abbi Page, a sophomore early childhood education and special education major from Harlem, Georgia. This award is given to the friendliest contestant, voted on by the other contestants. Page also received the photogenic award, voted on by the public.

The people’s choice award went to Kameran Land, a senior kinesiology major from Brunswick, Georgia. Jars with the contestants’ names and pictures were placed outside the auditorium to collect money for Eagles for Eagles, a fundraiser for GS students in extreme financial hardship. The contestant with the most money raised won this award. Land raised $150 for Eagles for Eagles.