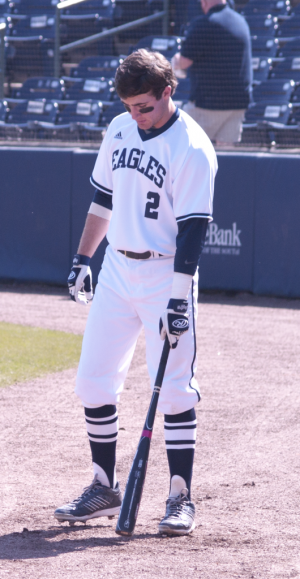 Riding a three-game winning streak over the weekend, Georgia Southern University baseball travels to Atlanta to take on The Georgia Institute of Technology for one game.

In the first matchup between the teams earlier this year GSU won by a score of 4-3 with sophomore Jason Richman and senior Matt McCall combining for five scoreless innings pitched with five strikeouts.

Georgia Tech is on a hot streak, winning the team’s last four games by an average of three runs.

Both teams are similar in that they dominate at home, but struggle on the road which could be detrimental for the Eagles.

The Yellow Jackets are 19-13 overall with 15 of their wins coming at home. The Eagles on the other hand are 7-6 on the road, bringing their road record above .500 for the first time in three weeks.

Georgia Tech has only four batters that are currently hitting above .300, and as a team the Yellow Jackets are hitting .278. Senior middle infielder Mott Hyde leads the team in home runs with two and RBIs with 22.

Pitching-wise the Yellow Jackets have been led by redshirt junior Matthew Grimes as he tops the team with a 4-1 record in five starts and a 3.21 ERA.

As a team they have a 3.30 ERA and allow opponents to hit .253 and the strong point of the pitching staff is the relief pitching.

GSU junior outfielder Aaron Mizell has nine home runs on the year, which almost totals the entire GT team that comes in with 10.

The Eagles have slowly declined in run production and as a result the batting average has also declined, but they still hit a solid .308. Four Eagles also have more RBI’s than Georgia Tech’s leading run producer.

Two pitchers to watch for on GSU for this game will be Richman leading the team with five wins and a team-low 1.39 ERA in 24 appearances.

Junior Sam Howard has had a solid year so far despite only posting a 4-3 record. In eight starts Howard has posted a team-high 52 strikeouts along with a 1.64 ERA.

First pitch is set for today at 6 p.m. in Atlanta.