Your View – What do you think Student Government Association should be doing for you and our campus? 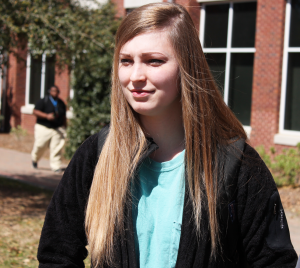 “What do you think Student Government Association should be doing for you and our campus?”

Tracy Griffiths, junior fashion merchandise and apparel design major: “If I was going to say that SGA is going to do something I think maybe figure out a way to get students into more community groups. For transfer students, like myself, it was really hard to meet people. I think SGA needs to be more involved; at my old school they were very big and very involved with homecoming and getting people to vote for things and stuff like that.”

Kejuan Turner, freshman respiratory therapy major: “I don’t know what SGA is. I think it would be cool if they could make the cafeteria 24 hours. They should be on the web page more.”

Ada Braselton, sophomore logistics and marketing major: “I don’t know how well they are doing because I don’t pay too much attention to them so I guess they aren’t doing too good because I don’t know about them. I’ve never heard of them, I’ve never heard of them sponsoring anything. Maybe they can send out emails to the students asking how they feel and their opinions on things. I know if I had a survey about dining plans and living options I would definitely take it.”

Evan Hanner, freshman pre-business major: “No clue what the SGA is. Yeah I kind of think they do enough but I’ve honestly never heard of them. They need more trashcans so they can advertise on the trashcans especially in the smoking sections by the dorms. People just keep throwing trash on the grounds so they can put trashcans there and put SGA advertising.”

Hayden Gerwein, senior finance major: “I don’t really know much about it. I think that they should work with clubs more. I am trying to get more funding for my club and I haven’t even thought about going through SGA. They should send out a survey through email and get student opinions.”

Tu Vo, sophomore biology pre-med major: “Me personally, SGA hasn’t helped me. I don’t really hear much about them. I see stuff but I don’t actually see what they are doing. I haven’t heard of them doing anything. I’m a CL on campus and want to build a community so it would be nice to see what they do and see more advertising.”

Cecilia Evans, sophomore child and family development major: “When you hear student government it sounds boring. They could host fun events to get more people involved like a student government rave or something. Something that would make us want to go, not just a meeting.”

Ashley Adams, junior 3D art major: “No clue what the SGA is. I don’t even know what SGA is. They need to get more out there and get more involved. They should be at the Rotunda more often. I didn’t even know we had a government.”