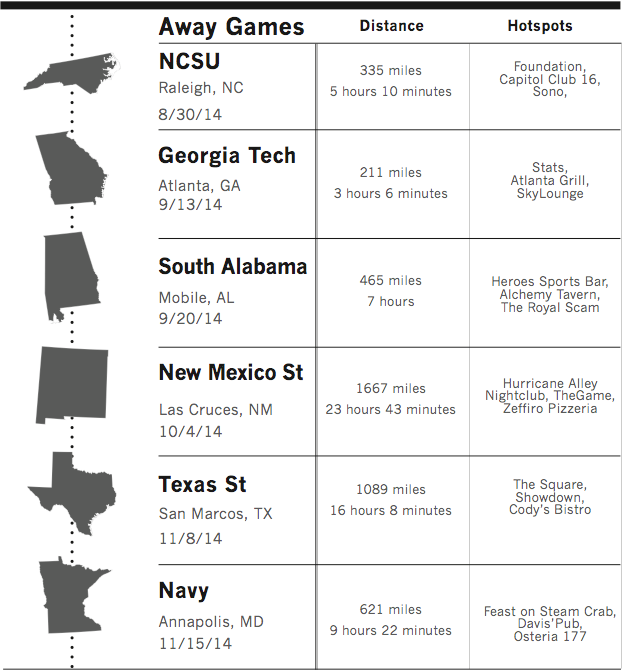 The 2014 Georgia Southern University football schedule was released a few days ago, and you might not recognize some of the teams on it.

The move to the FBS is finally complete with the finalization of the 2014 schedule which has the Eagles travelling as far north as Maryland and as far west as New Mexico.

Fans that go to away games will have quite a bit of traveling to do come Fall. The Eagles will have to travel a total of 4,388 miles in the six games that they travel away from Paulson Stadium, with the farthest being New Mexico State University at 1,667 miles.

However, Athletic Director Tom Kleinlein urged fans to pump the breaks on getting their hotels booked early.

“To all of you booking your hotel rooms for the FB season, make sure there is some flexibility. ESPN has not announced its schedule yet,” Kleinlein said on Twitter.

The road games that stick out most are the ones against teams that run the triple option. The United States Naval Academy and the Georgia Institute of Technology stand out despite the fact that GSU may not be running the triple option anymore with newly hired head coach Willie Fritz at the helm.

Nevertheless the Eagles can use these two games, as a benchmark to how they improved over the season, as GT is the second game of the year and Navy is the second to last game.

The farthest most GSU players on the current roster have ever had to travel is to North Dakota State University, which was 1,275 miles away.