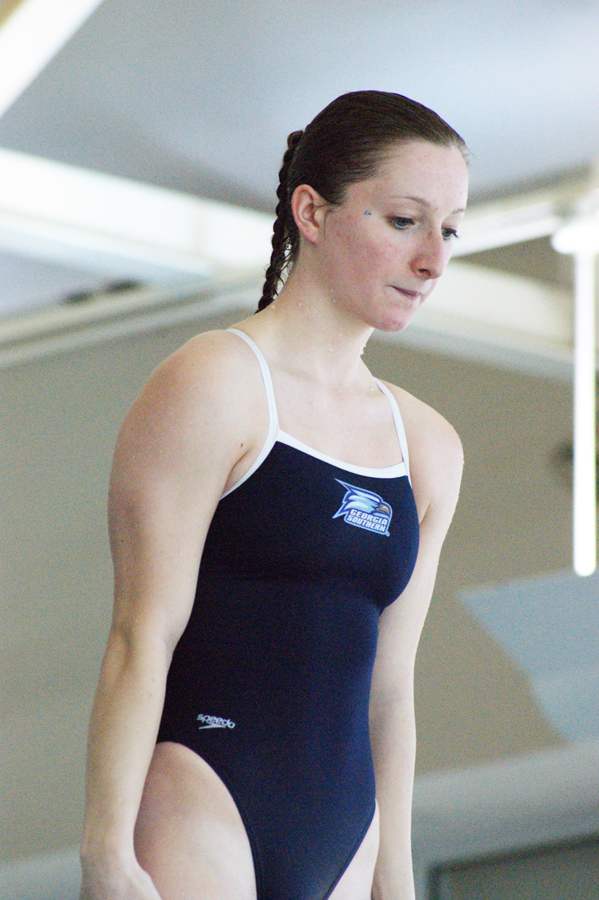 During the 2013-2014 season, sophomore Emma Weisel of Georgia Southern University qualified for the NCAA Zone meet and will travel to Greensboro, N.C. to start competing on Monday.

The NCAA Zone competition determines who travels and competes at the NCAA Nationals meet.  To qualify you must obtain a score of at least 265 in the one-meter springboard, 280 on three-meter springboard or 225 on platform. GSU is a part of the Southeastern zone, which includes all schools in Alabama, Florida, Georgia, South Carolina, North Carolina and Tennessee and is one of the biggest zones in the country.

“This is a very competitive meet. Our zone is probably the deepest zone in the country,” David Giambra, diving coach, said.  “Each zone doesn’t get the same amount of spots, it’s determined by how your zone does at the previous years NCAA Championship and since we are bringing back the most spots also brings credence to the fact that our zone is the hardest.  There are so many good schools and good divers that are in this zone.”

Weisel qualified for zones twice this season, the first being at the last home meet of the season against the University of North Florida.

Weisel qualified with a 286.8 on Saturday of that meet, six points higher than it needed to be and also a new pool record.  Weisel made it again at the Conference Championship meet with a 290.7 and made a new personal record and school record at the same time.  Senior Sara Meisenhelder from GSU also qualified, but will not be competing.

“I went from missing it by six points [the first day] to qualifying by six points [the second day], so that was great. It was just a great meet and it was such a great experience,” Weisel said. “It was one of those days where you felt like nothing could go wrong, dive after dive they just kept going really good. Then I also qualified at conference with a higher score, so I got my personal best and broke the school record by a smidgen.”

Practicing six days a week and keeping to a strict competition dive schedule, Weisel is preparing physically and mentally for this meet.  Despite this being her first time ever going to a NCAA Zone meet, Weisel is not backing down.

“I really have high expectations for myself on three-meter mainly because that’s the one I do better at. I’m more of a three-meter diver,” Weisel said.  “My goal would be to qualify for finals, which would be top 18, and then come back and be able to compete again for a second time on Tuesday.”

Despite being the only diver from GSU to still be training, Weisel said that her teammates have continued to keep up with her and that they are her biggest support system.

“They are my biggest supporters, other than my family,” Weisel said.  “They have been there for me every step of the way, not only through practices, but after every dive they were all standing there cheering for me and yelling and they’d cheer when I would get up on the boards to go.  They are some of the biggest supporters I have and I love it.  Here at Southern, all of the divers have the biggest cheering section ever and the biggest supporters in the conference.”

Continuing to prepare mentally and physically, Weisel will start competing on Monday, March 10 with the support of her team and Eagle Nation.