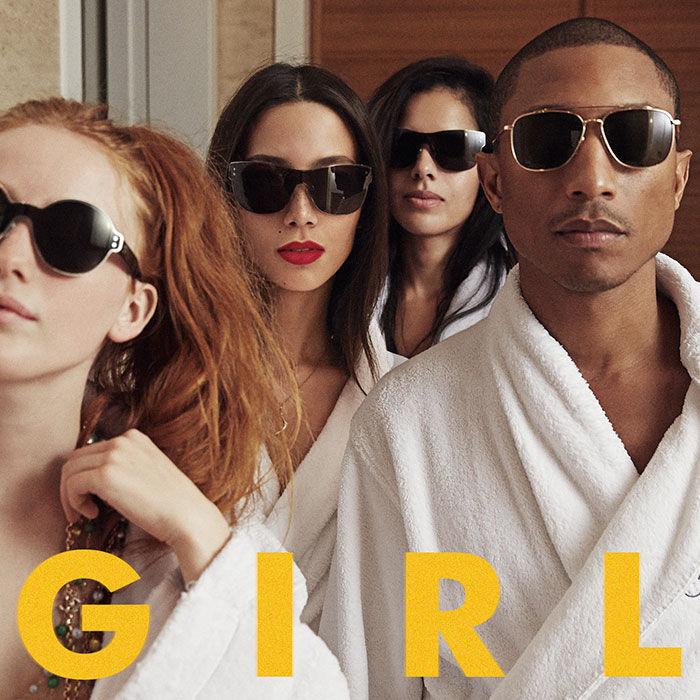 Bottom line: Overall the album wasn’t bad but it most definitely wasn’t good. It wasn’t boring but it was undeniably bland. “G.I.R.L.” was an extremely average album.

Pharrell’s latest album leaves one wondering why he just doesn’t stick to production.

In his time as a producer, Pharrell has produced several number one songs and albums. He should just stick to what he is good at.

He, yet again, produces a vibrant funky mix of pop music. Most of the songs consisted of Pharrell singing bland hooks in a slightly off-key awkward voice.

The best and most interesting thing about Pharrell’s “G.I.R.L.” has to be the album cover. The cover features a photo of Pharrell standing in a bath robe and wearing a trendy pair of sunglasses. Three females are wearing the exact same get-up as Pharrell.

Pharrell’s album really wasn’t bad at all. The problem with it is that songs like ‘Happy’ and ‘It Girl’ sound way too much like everything else on the radio. There is nothing unique about it. It is simple music anyone can bob their head to and enjoy for 10 seconds before they change it.

“He makes music simple enough for babies to understand. He is not doing anything special,” Julian Cosly, freshman exercise science major, said.

The album has no replay value at all. The songs on the album are more annoying than catchy.

“Every time I hear the lead single ‘Happy’ I want to throw up. It is annoying and it never stops playing on the radio. It’s beginning to give me a headache,” Nicholas Cartwright, senior nursing major, said.

The production and overall composition of the music could be described as flawless: however the lyrics leave much to be desired. Lyrics like “And if they don’t want to join us, cool, but it’s our time” are crazily simple. The lyrics have no bang. They have no wow factor.

One positive of the album is that it is overwhelmingly positive. It is cheery in mood and melody and it exudes the feeling of Pharrell knowing something the rest of us do not. This is definitely the album to listen to if you have had a bad day.

Another good of the album is that it featured a number of big names in the pop world. From Alicia Keys to Miley Cyrus, these artists should definitely bring some attention to the album.