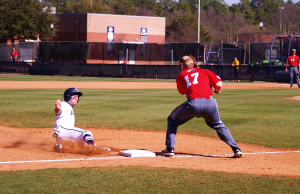 The Georgia Southern University baseball team is off to its best start since 2009 when it appeared in the NCAA regionals, coming in at 10-2 after a 3-1 weekend.

Despite the early success the game they play tomorrow will be one of the toughest they will have all season as they take on the College of Charleston, who comes in at 10-1.

The Cougars made a statement opening the season against nationally-ranked University of North Carolina and took the series, winning two of three games, and since then have been on a tear, winning the last nine games.

Don’t count the Eagles out as they have absolutely blown teams out boasting one of the top offenses in the nation coming in at 128 runs in 12 games, good for an average of 10.6 runs per game.

Not to mention the fact that as a team they double the run production that CofC has scored this season.

While both teams are similar in nature the interesting facet of this matchup will be the team’s defenses.

The Cougar’s have allowed only 36 runs in the 11 games they’ve played for an average of almost 3.3 runs a game while GSU has conceded 43 runs in 12 games for around 3.6 runs a game.

Both pitching staffs as a whole are well put together with CofC having a 2.73 earned run average while the Eagles have a 2.86 era.

As a whole, offensively, one person sticks out in the Cougars lineup, and that is sophomore infielder Carl Wise. Wise leads the team in runs batted in with 16 and is tied for the team lead in home runs with one.

GSU has taken more of a team approach which has lead to them scoring the amount of runs that they have as seven players are hitting over .350. Among the seven, four of them have over 15 RBIs.

The player for GSU that has been on a tear as of late is junior outfielder Aaron Mizell. Mizell is hitting .425 with a team-leading five home runs and 16 RBI’s. This past weekend Mizell hit three home runs and drove in seven runs.

Both teams are garnering national attention in the college baseball rankings and it will be interesting to see how the Eagles handle a tough road game before they hit the meat of their schedule.

First pitch is set for Wednesday at 6 p.m. in Charleston, S.C