Matt McCall: One save away 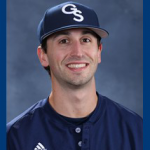 baseball diamond so far this season.

With wins over the Georgia Institute of Technology and the

University of Georgia, the Eagles have shown that they do, in fact, run the state

of Georgia. Part of the success GSU has had this season could be largely attributed

to the success on the mound. Numerous pitchers have been showcased this season,

but there has been one standout.

Senior right-handed pitcher, Matt McCall, grew up playing baseball his whole life. He has been at it for 20 years and his love for the game has never faded. After lettering in baseball during high school while only allowing 28 earned runs in 82 innings pitched, McCall decided to continue his career at Mercer University.

During his debut season at Mercer, McCall was able to win two of his first three games while also being named to the A-Sun All-Freshman Team in 2010. However, he was never satisfied while at Mercer so he chose to transfer and carry out the rest of his baseball career at GSU.

“I really liked it over here, and [I] just felt like here was a better fit,” McCall said. “My only regret is that I didn’t come here my first year.”

The move from Mercer to GSU went very smoothly for him. “It was easy, easy transition. Coach Hennon, Coach Green welcomed me in,” McCall said. “Like I said, I felt more at home here than anywhere else.”

McCall came to GSU as a starter, but after only four games, he began being used as the relief pitcher. Apparently the coaches liked what they saw because that’s where they kept him. He seems very happy about the position and has responded well to the changes that came with it.

“I’ve enjoyed being relief because you can be a part of every game, and you know, I just feel like I get to help the team out a lot more often than I would when I used to start,” McCall said.

After tying a school-best four saves during his first year at GSU, everyone could see this kid was special. Now he is well on his way to getting a spot on the list of top 10 career saves of all time. He currently has nine saves and needs only one more to make the list.

Although this is a great achievement, McCall does not cling to it.

“I think it’s really cool, I mean whatever I can do, you know to help the team is my biggest thing. I mean it’s not about me by any means and this team has, you know, big places to go and I’m just lucky to be a part just helping with that,” McCall said. “As long as I’m helping the team I’m happy.”

McCall doesn’t have any future plans at this moment, so he remains focused on the team. “I mean I’m just trying to make this team go as far as it can go, and you know contribute as much as I can,” McCall said.

The Eagles will be back in action today as they head down to Jacksonville, Fla., to take on the University of North Florida Ospreys (12-11) at 6 p.m. when McCall will look to possibly add another save to his career.