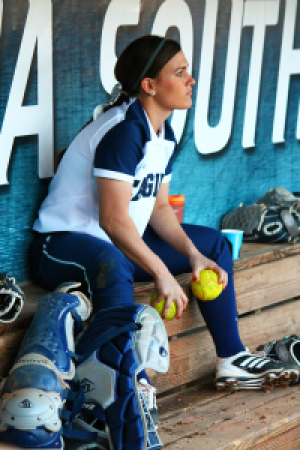 After winning four out of five games in the Eagle Classic this past weekend, the Georgia Southern University softball team will travel to take on Kennesaw State University (8-5).

Kennesaw had less success in their big games. Early in their season the Owls were handed a 6-0 loss by seventh-ranked University of Alabama. Over the weekend the Owls took the mound against 11th-ranked Stanford University and were turned away 0-8.

At bat KSU will rely on senior catcher Angie Dascoli. On 42 at-bats the senior has a batting average of .357 with a .413 on-base percentage. Sophomore infielder Missy Perkowski has the team’s highest batting average with .367 and one home run on 30 trips to the plate.

Coming into the game on Wednesday senior shortstop Kourtny Thomas will look to build on her established success so far this season. Through 18 games Thomas has a .353 average in 51 at-bats, a slugging percentage of .745 and six home runs. Thomas will be assisted by senior utility player Shelby Morrill who has been a consistent force for the Eagles, with a .319 average and three home runs.

Senior pitcher Amanda Henderson will most likely take the mound for Kennesaw. Henderson has been credited with seven wins and four losses on the season with a 1.13 ERA. She has managed to strike out 66 batters and has allowed five home runs. Henderson saw limited time this weekend against Stanford, pitching in only three innings but allowed three runs.

Getting runners on base will be an obstacle for the Owls against senior pitcher Sarah Purvis. In eight games Purvis has six victories and a .79 ERA. She has compiled one more strikeout than Henderson in three games less. Purvis will enter the game with considerable momentum after a throwing a no-hitter against Troy University last weekend.

The Eagles have the statistical advantage in every category, but with a big rematch against third-ranked Tennessee this weekend fans can expect some younger players to get additional experience in this matchup. The game is set to begin at 6 p.m. in Kennesaw, Ga.