Hunter Thomas shares how perseverance will pay off 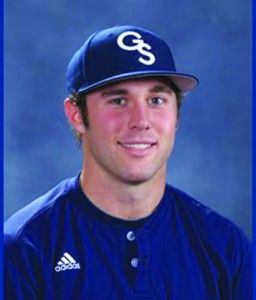 Unforeseen injuries when playing sports at the competitive level can often shatter expectations, which Georgia Southern University junior outfielder Hunter Thomas came to realize after missing the majority of the 2013 baseball season.

Graduating from Chattahoochee High School in 2011, Hunter Thomas presented an arsenal of weapons for athletic scouts. Thomas lettered all four years as a baseball star, played as a safety for the football program and assisted the Cougars to a state championship in high school.

Despite Thomas’ successes in both football and baseball, ultimately he was to seek a further career in baseball.

Thomas said, “Baseball [was] always before football,” a view shared by his father, who also played baseball in high school.

As a high school student with athletic success in numerous activities, Thomas was faced with the important decision of choosing the school with the best fit for him to build into a better athlete, being confronted with offers from Western State University, Virginia Polytechnic Institute and State University, the University of Tennessee and finally, Georgia Southern University.

Excited for the chance to begin a new career, Thomas chose GSU for the opportunity to play freshman year with high aspirations to develop early on into a star.

However, after an exceptional freshman season with a batting average of .344 as well as a perfect fielding percentage in 21 chances, Thomas was struck with an injury during his sophomore campaign that could have jeopardized his career. Thomas completely broke his fibula, cracked his tibia and dislocated his ankle.

The severity of the injury was felt team-wide, as Thomas was unable to play the remainder of his sophomore year. Additionally, he was unable to walk for two months, followed by another month and a half in a boot.

The recovery process for Thomas was gruesome, spending many days completing therapy for his injuries, which he said was assisted by lots of players willing him to return to the starting ranks

However, through the entire recovery process, Thomas said that his mother was a main influence in his progression with how she offered unfaltering support, often traveling to GSU in order to be as helpful as possible for him during his return.

Thomas said that he is not 100 percent yet. The junior has once again returned to the active squad for the 2014 season, where the Eagles have shown a new era of dominance, assisting the team to a 19-7 start.

This season, Thomas is posting a .227 batting average, nearly returning to form after his long recovery. Thomas’ story serves as an encouragement to his team as well as fans of GSU, giving testimony that even when faced with an injury as seemingly insurmountable as his there is always room to get better, Thomas said.

Thomas said that overall he has become more mature as a player and he looks forward to his final year in hopes of continuing the high level of competition the baseball program has seen in the past years.