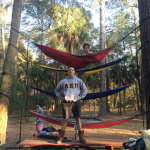 AEPi is a cultural Jewish Fraternity and so will accept someone of any religion so long as an interest in Judaism is prevalent. AEPi has not yet been recognized by the Inter-Fraternal Council on Georgia Southern University's campus. Photo courtesy of: AEPi

For the brothers of Alpha Epsilon Pi, helping others is a mitzvah. As the first Jewish fraternity at Georgia Southern University, it is one they take very seriously.

Mitzvah is a Hebrew word meaning “commandment,” and in Judaism it is used to refer to a religious obligation. Though AEPi is largely a culturally Jewish fraternity rather than a religious one, its members consider it important to focus on the mitzvahs of service and education. Living in the Bible belt, this sometimes includes educating others about what it means to be Jewish.

“A lot of people in Statesboro haven’t really encountered too many Jewish people, so at first when you tell them you’re Jewish, they’re kind of a little bit taken aback,” Savitskiy said. “But then they find the guts to ask you that question that they’ve always wanted to ask a Jewish person.”

Zach Arogeti, AEPi historian, said that the members do not mind being asked.

“Judaism really presses on education, getting the best education and educating others,” Arogeti said. “It’s a mitzvah to teach, and it’s also a mitzvah to learn.”

The Statesboro chapter of AEPi was formed last year by a group of students seeking to create a space where Jewish students could feel at home. The fraternity often holds Shabbat dinners, matzah ball soup nights and other Jewish cultural events that students would be hard-pressed to find at a traditional fraternity.

The Statesboro chapter of AEPi is not yet a part of the Inter-Fraternal Council, but it has been recognized by the national AEPi fraternity. Brother-at-large Bryan Sandler, a senior biology major, said that, while AEPi does follow almost all IFC rules and regulations, not yet being bound by them gives them the flexibility needed to get the word out and recruit Jewish students year round.

“We have a little more leeway,” Sandler said. “We do the same things. We’re just not on the same timeline.”

Seeking out Jewish students has unintentionally led to AEPi being one of the more diverse fraternities, Savitskiy said.

Despite the fact that currently there are no non-Jewish AEPi members, Arogeti said that it does not have to stay that way.

“If a student wants to join and is interested in the culture of Judaism, and they’re willing to be a part of it, we’re more than willing to have them,” Arogeti said.

Savitskiy said that while AEPi is a Jewish organization before it is a Greek one, that isn’t all there is to the organization or its members.

“Being Jewish is just a part of it,” Savitskiy said. “But we’re not completely about being Jewish – that would make us one-dimensional.”