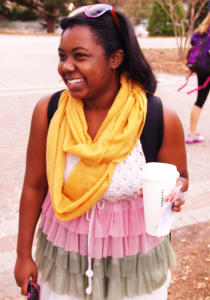 Should celebrities use their acceptance speech to make a political statement?

Jessica Smith, junior double major in sociology and psychology – “Why not? We get bombarded with news through different media outlets every day and people tweet about stuff and it’s on Facebook. It’s literally everywhere so why not mention it in a speech? If you are going to have access to that many people you might as well make it for something useful instead of just an acceptance speech.”

Madison Zack, sophomore business major- “I don’t think they should. Watching the Oscars has nothing to do with politics. People aren’t asking their opinion, people are watching the Oscars to watch who won but if that is your opinion you keep that opinion to yourself unless somebody asked.”

Kobi Tate, freshman computer science major – “I think that because it is a big celebratory event, the way he focused on it, it was more like the people. It was less the politics and more these are people that need help and it needs to be brought to light. I think that big issues are okay to bring up in an award show situation as long as it is less political and more humanitarian.”

Jeremy Lark, senior civil engineering major – “I think that it is okay if it is something that they feel strongly about. Sometimes celebrities bring stuff up and it’s too much but sometimes it’s like ‘hey that needs to be brought up.’”

Jacqueline Martin, senior English education major – “I don’t know. Part of me says yes because it’s happening and it’s real and it’s the truth. I think that it is important for people to be aware. I’m not totally against it. I think that it has to be appropriately stated. I think the Oscars could benefit from talking about more current events but I’m not sure if people would like it.”

Jacob Heater, freshman exercise science major – “Probably not. I think that it should just stick to the awards ceremony. I don’t agree with bringing it up. Because that’s like a happy time, and it shouldn’t be brought up. Meetings or talk shows are where it’d be alright.”

Callie Barber, freshman exercise science major – “I don’t think so. It’s kind of irrelevant to what the purpose of the awards show was. It wasn’t the time and place for it. I think it should just be focusing on honoring those who won awards.”

Ronnie Horgan, sophomore mechanical engineering major – “It sounds like a very sensitive topic, on a global scale, so I think that it’s not the best place to be discussing it, but I mean, how do you think people in Russia and Ukraine think about these award shows? They probably don’t have a lot of respect for them. I’m sure someone from the Ukraine watching it would be a little peeved that they’re just being showboated like that. I think that Americans can be very self-centered.”