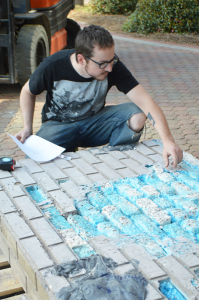 Faris, a Tybee Island native, has set out to create tabby replicas of local residential, commercial and industrial buildings from the Statesboro area that have been broken down due to wear and age.

“Those sites that you see around the community speak to neglect. Somebody has built them, taken great care to create them and over time they have broken down and they haven’t been fixed. The work is a good representation of neglect and transformation of life’s passing,” Faris said.

Tabby is a mixed material made from oyster shells, concrete lime, sand and water. It is native to the South and is considered to be the first American concrete because it is only found in historical buildings from the 18th and 19th centuries.

People go visit places made from tabby because it is pretty, but really when they were created they were just utilitarian. They weren’t anything special. They just were necessary. But now people have a nostalgic relationship with them. The work represents a specific time and place where these places still exist. Even though they’re neglected or overlooked, they’re being celebrated for what they are and not what they were, Faris said.

When people go to an art exhibit they look at the artwork and they expect to understand it, but artwork is like a relationship. In order to have a sense of intimacy, you have to spend time with it. If you’re going to come and you want to get something out of the exhibition, I recommend taking the time to be silent and reflective, Faris said.

Anthony Faris is a graduate of Savannah College of Art and Design and hopes to gain his master’s degree is 3-D artwork. Faris is also an active member of the artist’s group Stillmoreroots, which showcases site-specific artwork in outdoor areas. His work has been featured in exhibitions in the United Kingdom, Atlanta and Savannah.

Anthony Faris will be present Friday, March 7, for an Artist’s Talk to present the exhibition. “Risen Land” will be presented at the Center for Art and Theatre from March 3-13.