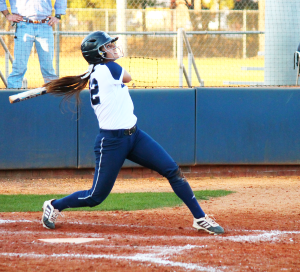 The Tennessee Tournament showed Georgia Southern University’s softball team some competition as they finished the weekend 2-2 in Asheville, N.C.

The Eagles had it going through the first two games defeating Campbell University 9-0 and defeating the College of the Holy Cross 3-2. The Eagles dominated both of these games at the plate and defending it as well.

Junior pitcher Brooke Red and senior pitcher Allie Miles combined for a one-hitter, allowing no runs for Campbell and Red earned 10 strikeouts. On the other side of the plate, the Eagles pounded nine runs and eight hits. Junior Kaitlyn Johnson hit a home run against Campbell that led to two runs plus her own, making their lead 9-0.

Senior infielder Kourtny Thomas was a crucial offensive player during both of these games, earning two hits and a run in the first game and a pair of homeruns in the second game against Holy Cross. But the biggest game of the tournament and for Thomas was against the University of Tennessee.

Day two of the tournament was a big day for Thomas, as they were going up against her old team, UT. The second day of the tournament didn’t start off well, losing to Western Kentucky University 0-3. This game only set the pace for the game against UT.

The Eagles were just as strong at bat as the Volunteers were, but the Eagles stranded nine runners on base while the Vol’s were able to get runners home. Thomas did not do anything spectacular against her old team, but senior pitcher Sarah Purvis played strong.

During this game, Purvis ended her school record of a 37 inning scoreless streak. Although her streak ended, she earned seven strikeouts and only allowed two runs.

GSU is set to begin Southern Conference play coming in with the second-best record in the conference. The first conference regular season game this coming Saturday against the University of North Carolina at Greensboro at 1 p.m.