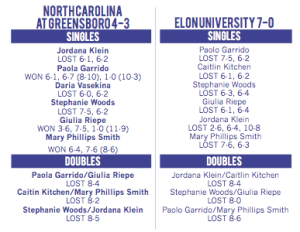 The women’s tennis team has officially entered its 2014 Southern Conference season and plans on making it one to remember.

Although they began their conference play by enduring a crushing 0-7 defeat against their highly ranked opponents from Elon University on Saturday, the Georgia Southern University Eagles did not go down without a fight in their match against the University of North Carolina at Greensboro on Sunday, which ended with a 4-3 victory for the Spartans.

“I think we started off Saturday pretty strong, we lost to Elon in second round of conference last year so this was a pretty big match for us. I think we all put up some pretty good scores and definitely gave it our all,” Jordana Klein, junior, said.

The Eagles were able to take home three of the six singles victories, however all three doubles matches ended in favor of the Spartans.

“Of course, losing 4-3 is pretty tough but I just think we really need to focus on our doubles play because that could always be the deciding factor,” Klein said.

The Eagles, now holding a record of 4-5 and 0-2 in the SoCon, will continue towards their strive for victory this season as they face off against two seemingly unrelenting opponents, the University of Tennessee at Chattanooga and Samford University, this upcoming weekend. UTC holds an impressive 7-2 record for the 2014 season and Samford is not far behind with an outstanding record of 6-1.

The University of Western Carolina and Appalachian State University both stand 0-1 in the SoCon rankings as of right now. GSU will go up against both schools on the weekend of March 15. Hopefully they will prove easier competition for the Eagles as UWC and ASU have not been particularly dominating the courts as schools such as SU with their already 2-0 SoCon record have.

SU had already dominated Kennesaw State University 7-0 on Jan. 25, a month before KSU was able to overpower GSU 4-3. GSU will undeniably need to be exceptionally well prepared as they face-off against SU on Sunday.

The Eagles will also have a regular season match against a 5-3 University of North Carolina at Wilmington on Wednesday at the Hanner Tennis Complex.

“Wednesday we play against a non-conference team and that should help boost confidence going into this next weekend. Samford and Chattanooga should be pretty tough, but I think we all believe we can beat them. So hopefully we’ll be able to improve our SoCon rankings,” Klein said.