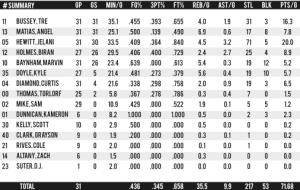 With the regular season behind us and the Southern Conference tournament ahead, it’s time to reflect on Georgia Southern University’s season of mediocrity.

There are times when it looks like they have the stuff to contend for the top spot in the league.

The defense is, for the most part, consistent. They can shoot from deep. They make hustle plays and have a player averaging 20.0 points per game. It was times like the 77-61 win over second-place University of Tennessee Chattanooga that all of these factors were on display.

But then there are times when it looks like they would be lucky to win another game. It was times like a 17-point loss to a 6-25 The Citadel team that had fans scratching their heads.

How can they be so inconsistent?

Relying too heavily on its guards doomed GSU to inconsistent mediocrity. If junior Jelani Hewitt and senior Tre Bussey don’t perform, then neither do the Eagles.

That’s because there is no other option. Outside of the top scoring guard duo in the conference, the team lacks an identity – especially in the paint.

The Eagles have a better chance of scoring points by putting up a three than getting the ball to a big down low. They would rather come down the court and shoot a questionable jump shot than work the ball inside.

And you can’t blame them.

Senior forward Marvin Baynham is an intimidating defender, but he doesn’t strike fear with the ball in his hands. Freshman forward Kyle Doyle shows promise but lacks too much experience and size to be the answer down low. Junior forward Angel Matias has the heart to battle anybody in the league, but at 6-foot-4 going against 6-foot-8, 9,10 – there’s only so much he can do.

A lack of frontcourt production has hampered the team all season long and puts pressure on Hewitt and Bussey to take a lot of shots. Guards are the most susceptible to an off shooting night. So relying on them to carry the offense is like relying on Georgia State University to put up a fair fight next season in football – it just isn’t gonna happen.

The season isn’t over and not all hope is lost. Miracles in March happen every year. But unless the Eagles can find a way to produce consistently in the paint, their SoCon tournament will be like their regular season – a disappointment.