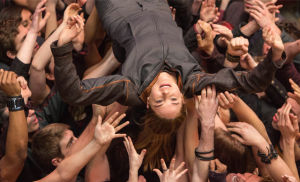 “The “Divergent” films have gotten off to a great start and have left audiences eager for the second movie.”

One of the biggest questions being raised at the release of “Divergent” is “would it be getting such bad reviews if “The Hunger Games” did not exist?”

“Divergent” follows the story of Tris Prior played by Shailene Woodley (“The Secret Life of the American Teenager”) who lives in a world where the citizens are divided into five factions based on their strongest personality traits.

After discovering that she is Divergent, meaning she does not fit into just one faction, Tris chooses to join Dauntless to become a soldier and inevitably fight against the oppressive leaders trying to expose and destroy Divergents.

It is not very difficult to see the similarities in both series. They are both trilogies based on 16-year- old girls who live in a futuristic, post-war dystopian society. Both fight against an oppressive leadership and train with their peers to heighten their mental and physical capabilities.

One of the taglines used by the filmmakers of “Divergent” is “What makes you different, makes you dangerous.” But in their case of box office success, it’s their similarities that are getting them in trouble.

That being said, it is imperative to disassociate “Divergent” from “The Hunger Games.” Despite the similarities, “Divergent” is the beginning of a film series that can stand on its own two feet.

The story line of “Divergent” does a great job of reaching out to a young audience with their theme of “do not define me.” However, the film’s creators managed to not make the message come off as an after school special.

This film also featured a very talented cast ranging from Oscar winning actress, Kate Winslet (“Titanic,”) to up and coming comedic actor Miles Teller (“21 and Over,”) and introducing British heartthrob Theo James in his breakout role as Four.

It was very interesting to see Kate Winslet not cast as the lovable protagonist but instead as the intimidating authoritative figure. However, she still managed to give a fantastic performance as Jeanine, despite being out of her comfort zone and being pregnant whilst filming.

Also, Shailene and Theo had a very natural chemistry on screen which greatly intrigued the audience. The romance between their characters, Tris and Four was more of a side note rather than the main point of the film which was refreshing in the sense that the story was not overshadowed by teen makeout scenes.

“Divergent” is the first of its trilogy and its sequels, “Insurgent” and “Allegiant” are already in pre-production. Despite a few negative reviews and comparisons to “The Hunger Games” series, the “Divergent” films have gotten off to a great start and have left audiences eager for the second movie.