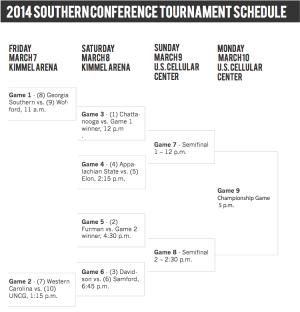 After losing their three final games of the regular season, the Georgia Southern University women’s basketball team is ranked eighth overall and will be in the first game of the Southern Conference Tournament.

The Eagles had two road games against Wofford College and Furman University this past weekend, hoping to move up in the rankings with two final wins, but it did not turn out that way. Both teams defeated GSU, dropping them in the ranks even lower.

Although Wofford beat GSU 73-49, they are ranked ninth, the second to last seed in the conference. This means that the very first game of the conference will be a rematch between the Eagles and the Terriers. Earlier in the season GSU defeated Wofford, but this past weekend the Terriers proved that their ranking will not determine how hard they play.

Wofford has only lost two more games than GSU has.  The Terriers showed the Eagles no mercy holding the lead for the vast majority of the last game. In last year’s tournament, GSU was able to pull off that game-one victory, and as long as the Eagles stick to their fundamentals and play cohesively another game-one victory looks promising.

This year, if the Eagles proceed to beat Wofford in the first game, they will go head to head with UTC once again. Both times these teams played this season, UTC defeated the Eagles. The Mocs have 18 SoCon titles and have been aggressively playing this season in hopes to bring home another title. UTC is undefeated in the SoCon winning all 18 games they have played, while GSU finished 7-11 in the conference.

The Eagles have a good chance of beating Wofford in the first game, but, if they continue past that, the Eagles will have a rough time in the following game against the Mocs.

The SoCon tournament will begin Friday, March 7. The Eagles will go up against Wofford at 11 a.m. and then shortly after Western Carolina University will play the University of North Carolina at Greensboro at 1:15 p.m.