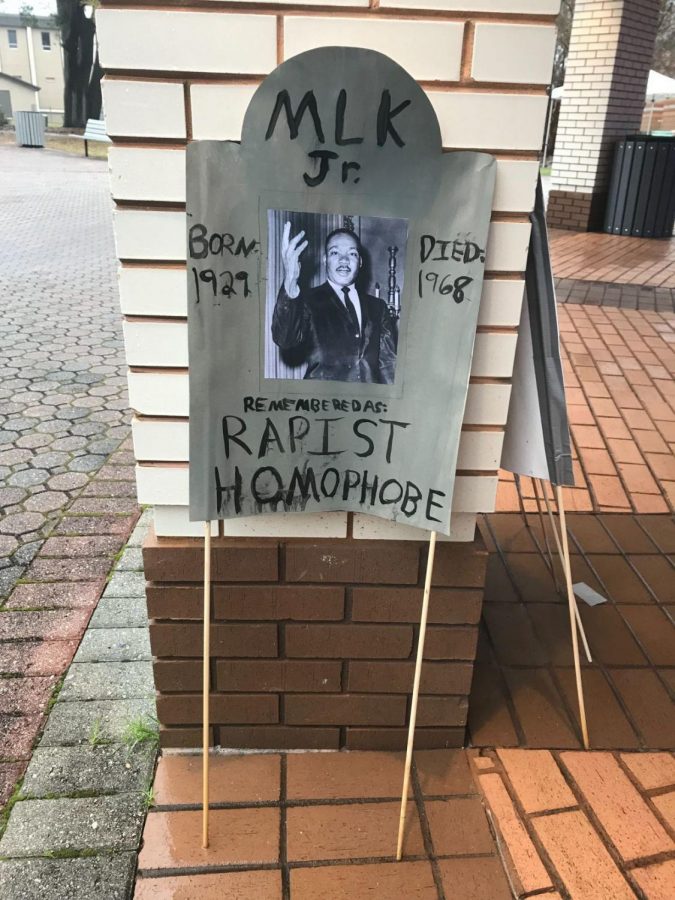 A group called the Intercollegiate Studies Institute advertised their new chapter at the Russell Union Rotunda Tuesday with signs that read, “What’s worse than burning books?” and “If college is preparing us for a career, then what’s preparing us for life?”

The group displayed signs with photos of Martin Luther King Jr., Karl Marx, Thomas Jefferson, George Washington, Ronald Raegan, Muhammed and other figures with labels such as “racist,” “homophobe,” “sexist” and other words written around them.

The Intercollegiate Studies Institute, described by Inside Higher Ed as a group that promotes conservative and libertarian thinking, is a national organization, and the group at the Rotunda aims to establish a chapter at Georgia Southern University.

One of the group officials was Trevor Wright. Wright, a GS alumnus who teaches high school English at Trinity Christian School in Statesboro, said he is pursuing a graduate degree.

Wright said the display was a “great way to grab college students’ attention.”

“Much of what we’re doing, we do not support. We think this is a very hyperbolic exaggeration of what some people in culture, how they view history,” Wright said.

The group distributed flyers that posed this question: “What is worse: A college student burning a few copies of a novel, or a professor convincing hundreds of students the foundational literature of civilization isn’t worth reading?”

“I think there are some professors, not just here, but around all of America, and they support not reading any works by Thomas Jefferson or Karl Marx or George Washington, and while they’re not burning books, they’re convincing thousands of students not to read history, not to read political philosophy, and that’s kind of the message we’re trying to raise,” Wright said.

Three professors from the literature, philosophy and political science departments, however, said they do not avoid teaching works by historical figures with controversial histories.

Caren Town, Ph.D., is a literature professor who wrote a book on censorship in 2014. She said she teaches works by writers who have controversial histories, and she said it is necessary to teach books that make people uncomfortable.

“It’s frustrating to us to hear that, because we think, we don’t know where you’re getting that sense that books are being kept from you, because that’s the last thing we’re doing,” Town said.

Town listed Flannery O’Connor and Ezra Pound as writers whose works she includes in her coursework despite any controversial beliefs they held.

Town expressed concerns about “cancel culture,” the phenomenon of scrutinizing works or people on social media, but said neither she nor her department censors books.

“I sympathize in a way with what he’s saying, but I think as far as how it happens on campus, it’s not a concern,” Town said.

In the Department of Philosophy, Elizabeth Butterfield, Ph.D., is an associate professor who said she teaches philosophies that are interesting, historically important or influential, including ones belonging to controversial figures.

Butterfield said she teaches the philosophies of Martin Heidegger, a German 20th-century thinker who supported the Nazis. She explained that she deals with this by having a conversation with her students about what it means to teach Heidegger’s philosophy while knowing he was a Nazi supporter.

“We don’t avoid it. We actually make it part of the topic,” Butterfield said.

Aristotle is another figure Butterfield teaches in her courses. She said her classes talk about which parts of his philosophy are worth learning, knowing that the philosopher lived in a time where it was normal to believe men had more potential than women, and Greeks than non-Greeks.

“Whenever we’re teaching someone from history, we might find that they have different political views or understanding of diversity than we do today because times change, and so the important thing to do is to provide a context for having those conversations,” Butterfield said.

Joshua Kennedy, Ph.D., assistant political science professor, said he has taught the writing of Karl Marx, one of the figures portrayed in the group’s posters, in his courses.

Kennedy said he hasn’t shied away from teaching about figures who have controversial pasts when they are relevant to his course material.

In his courses, Kennedy said he allows students to drive the discussion, so they could talk about the figures’ pasts if they would like. However, he said this topic has not come up in student discussions.

“It is one of the benefits of being a professor, being able to talk about controversial figures and controversial subjects and to challenge students to think about those kinds of things. I think it’s an important part of the job,” Kennedy said.

At the Rotunda, Wright said the group was advocating for “a more nuanced approach to history” that avoids condemning people, such as slave-owner Thomas Jefferson, with 21st century standards.

“We think that’s unfair. Thomas Jefferson couldn’t just walk to Walmart like we could to buy his groceries. We have the luxury of living in a much more technological world,” Wright said.

Founded in the 1950s, the Intercollegiate Studies Institute states on their website that they “teach foundational principles that are rarely taught in the classroom—the core ideas behind the free market, the American Founding and Western civilization.”

The organization lists on their website alumni including Supreme Court justices Neil Gorsuch and Samuel Alito, a cofounder of PayPal and other figures, and claims colleges leave students feeling “isolated and even threatened if they question progressive orthodoxy.”

The GS chapter, which meets Wednesday evening, is advertised with the slogan, “Think well. Live well.” Wright said he is working with the organization due to his love of learning.

Kendra Kittinger, assistant director for the Office of Student Activities, said the group is in the process of becoming an organization at GS.

Town said, “Bottom line, we don’t shy away from controversy. I have certain writers that I don’t particularly like and may make me a little squeamish when I start to look into their background, like Ezra Pound, for example, who’s a fascist. That’s kind of unnerving, but I would never say I’m not teaching this because of the personal beliefs of the author.”

Mitch Smith contributed to this report.