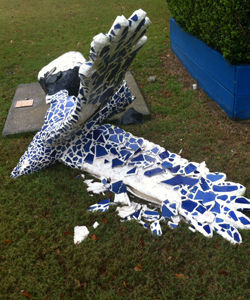 Two suspects have been arrested and are in jail without bond for acts of vandalism, including destroying the ceramic Eagle in front of Howard Lumber off Gentilly Road.

Justin Nasworthy and Jeffrey Tanner, both Georgia Southern University students, were arrested Thursday by Statesboro police, according to a press release from the department.

Acts of vandalism allegedly committed by Nasworthy and Tanner ranged from damaging mailboxes to destroying the flagpole of a World War II veteran, along with 11 other reported incidents. The damage occurred Nov. 16, according to the press release.