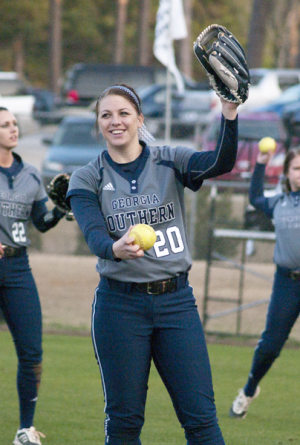 Sunday’s game against the No. 1 ranked softball team, the University of Florida, was cancelled due to heavy rain, but Georgia Southern University’s softball team made the trip down to Gainesville, Fla. worthwhile, finishing out the weekend 3-1.

This weekend the Eagles played two games back-to-back each day, so the Lipton Invitational was a great opportunity for them to get as many players out on the field as possible. This team is continuing to excel and defeat non-conference teams with the help of their well-rounded bench of players, and they showed that this weekend.

To start off the weekend, GSU faced off against Coastal Carolina University and had a 3-0 victory. The game had a slow start and things didn’t pick up until the fifth inning. The Eagles got all three of their runs in this inning, and the first two came in with the help of a triple by junior outfielder Breanna McLendon.

On the other side of the ball, senior pitcher Sarah Purvis did her thing in the circle, pitching her second shutout of the season. But, this wasn’t the last time the Eagles would face off against the Chanticleers.

The Eagles had a rough time carrying over the momentum from the CCU game right to the next one, but, nonetheless, resulted in a 4-3 victory over Troy University. Troy started the game with two single runs to take the early lead and benefitted from the three defensive errors the Eagles committed.

Senior infielder Kourtny Thomas turned the game around in the fifth inning when she hit her career first grand slam, ultimately sealing the deal for another Eagle victory.

GSU began their Saturday taking on Big Ten Conference team, Indiana University, and almost immediately showed the Hoosiers they were ready to play. In the second inning, the Eagles took the early lead of three runs with help from batters sophomore catcher A.J. Hamilton and senior outfielder/infielder Nicole Benton.

Indiana managed to get one run on the scoreboard before Thomas excelled once again up at bat. Hitting a double to the right, she plated three more runs, doubling their lead. Throughout the game, junior pitcher Brooke Red did her job by limiting the Hoosiers to only two runs and five hits, earning a 6-2 victory.

After the Eagles performance against Indiana and their previous victory against CCU, another win against the Chanticleers would seem almost like common sense, but this was not the case. The game started off even with both teams getting a run, setting the stage for the tough game they played.

In the third inning, CCU took advantage of two errors committed by GSU and took the lead, 2-1. There was no more scoring for either team after this inning, and CCU did an impressive job allowing the Eagles to only get one hit for the remainder of the game.