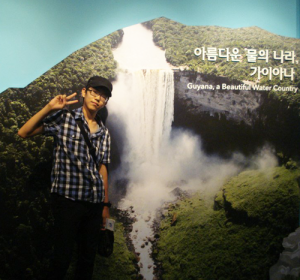 A fusion of two distinctly different cultures is just one of the things that one Georgia Southern University student is bringing to the community.

“My parents are from Korea and they moved to Honduras because my mom was an accountant and her job opened a new branch there and also because Honduras at that time was a good place to live,” Yun Lee said

His life has been embedded with Latin culture, Korean culture and Asian culture as a whole and he speaks English, Spanish and Korean.

“Because I have a blend of both cultures I tend to lean more into one depending on what I am doing. When something is about a Latin country I think in the Latin way of mind and become very emotional. I think like a Korean when I do things concerning family,” Yun Lee said,

GSU has a large number of international students from Honduras and surrounding Latin-American countries.

“I came to Georgia Southern because of my counselor in high school. He told me about the transfer program for engineering majors which would allow me to come here and go to Georgia Tech in two years,” Yun Lee said.

“My high school and Georgia Southern also have a very good relationship with each other and I had a lot of friends and people I knew who were already here,” Yun Lee said.

Latin and Asian cultures are very diverse and the difference becomes even greater when they are compared to American culture.

“The way people in America think is very different than the way we think back home. Americans tend to over-think things and complicate them,” Yun Lee said. “Here, I find that there are a bunch of different races. There are white people, black people, and Asians. In Honduras there is not that much racial diversity and there is not that big of a difference between people.”

On campus Yun Lee is involved with many organizations and clubs including International Club, Association of Latin American Students and Archery Club.

Yun Lee said, “Before coming here I had already been practicing archery. It has been one of my favorite hobbies since I was little. When I got to campus I started asking around about it and I found out that there is a club. It’s nice to be able to find something to do on campus that I love.”