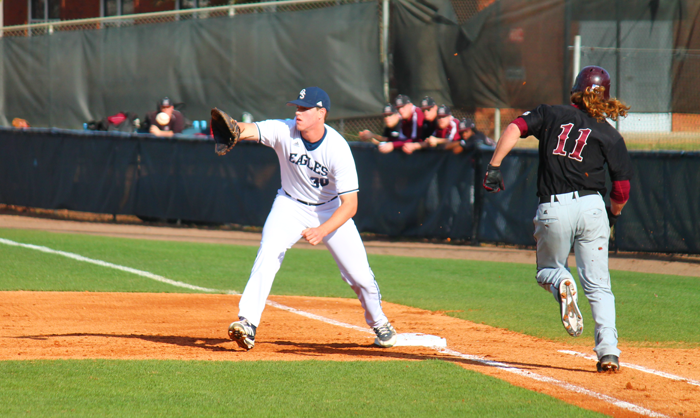 It felt like a little-league game where the inning isn’t over until everyone has had a turn to hit.

But even if the bats weren’t hotter than this week’s Sports Illustrated Swimsuit edition, there wasn’t much the Hawks could do.

Junior LHP Sam Howard had all his stuff working for him. He allowed only two hits over 7.0 innings of work while striking out 12 batters. Howard was hovering around 91 mph, occasionally touching 92 – and the Hawks weren’t sniffing it. Howard is now 2.0 with a 0.00 ERA this year.

There were a handful of scouts in the audience that came to watch him pitch; among them were guys from the Milwaukee Brewers and the Pittsburgh Pirates.

Three errors in the first three innings put the Eagles in a hole early. But once the defense settled, it was smooth sailing for GSU and starting RHP Josh Wirsu.

Wirsu (1-1) pitched five innings and only allowed one hit. Three runs were scored on him, but none of them were earned.

Griffin had four RBI in the game on 3-5 hitting. Freshman first baseman Ryan Cleveland was 2-3 with two RBI and hit his first homerun in an Eagle uniform.

Griffin is batting .429, which leads the team in average for someone with more than 10 AB’s, and has 11 RBI already this season.

This pushed the Eagles lead to 6-0 after one inning – after this, the rest of the game was a formality. Brown is hitting .414 and leads the team in RBI with 16.

GSU would tack on four more runs and allowed the Hawks to put one of their own on the board.

Junior shortstop Dalton Busby was 3-4 with three RBI on the day.

Sophomore RHP Ryan Frederick, a transfer from Savannah College of Art & Design, pitched a solid 5.1 innings en route to picking up his first win as an Eagle. Frederick gave up five hits and one earned run.

Busby smacked a solo shot to straightaway center field to put the Eagles up in the second inning 2-1. It was his first home run of the year.

Junior outfielder Hunter Thomas would add two more runs on a double to left-center in the third inning. He finished the game with two RBI.

The Eagles would allow the Hawks to add two runs late in the game, but they did not matter.