Dining Commons shuts down in response to power outage 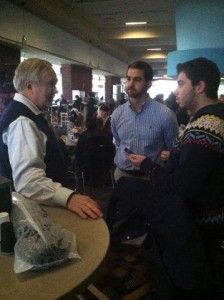 Students eating at the Dining Commons were asked to leave after a power outage shut down most of the lights and the computer system controlling who goes into the dining hall.

Brooks Keel, president of Georgia Southern University, showed up to the Dining Commons around 1:40 p.m. to speak with Jeff Yawn, director of Eagle Dining.

It was decided to not allow students to come in after 2 p.m. but they can come back to grab food from 4 p.m. to 6 p.m.

“We do have emergency power that allows us to have some lights. It doesn’t allow us to cook anything to any great degree so what we’ll do is allow students to finish eating what they’re eating now, ask them to exit the building, stop letting anyone else in after two o’clock,” Yawn said. “ From four to six, we’re going to have something a cold cut fruit chips something to that degree available for students to come by and pick up for them to take back to their residence hall and have something to eat later in the evening.”

At this point, there hasn’t been a decision made on whether or not campus will still be shut down tomorrow.

“We’re still working through that now. We are right on the edge. It’s exactly thirty-three degrees outside when I came in and north of us is pretty bad. What we’re afraid of is that temperatures go down in the night and the roads will ice over, making it treacherous tomorrow,” Keel said.

Keel is encouraging students to stay safe indoors and to look out for a decision regarding classes tomorrow late this afternoon.