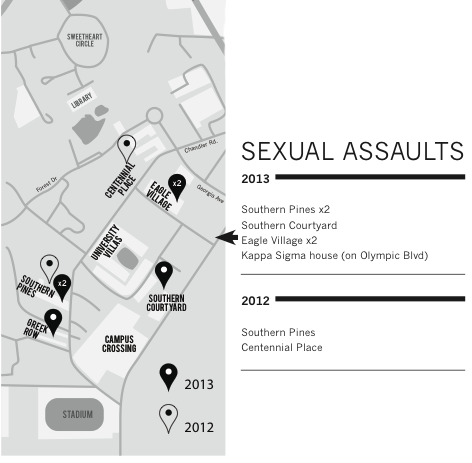 Reported rape cases have increased in the past four years on Georgia Southern University’s campus.

Law enforcement and victim advocates agree that sexual assault is the most underreported crime, so those numbers may not accurately reflect what is actually occurring in the Statesboro community.

“Campus sexual assault is especially underreported and is not taken as seriously just because of the age group.” Shanna Felix, president of Sexual Assault Student Educators at GSU, said. “It’s very difficult to report especially on some college campuses.”

In a report provided by the White House, reporting rates for campus sexual assault are very low, on average only 12 percent of student victims report the assault to law enforcement.

“One is too many. It’s like everything else to that person, to that victim, that’s a huge devastation. It doesn’t really matter how many other people are equally as devastated…” Chief Mike Russell, director of public safety, said. “In no way, shape or form does anyone bring this on themselves.”

Many of the rapes reported to GSU Public Safety involve alcohol, but not drugs, Russell said.

It’s difficult to prove that drugs were used to assist a rape because of the time window that a drug has to be tested for, Jared Akins, Chief Deputy of Bulloch County Sheriff’s Department, said. He said that most will report they were using alcohol but are not willing to volunteer that any other substances were being used that could impair judgment.

Since 2010, the number of reported rapes for Bulloch County has doubled every year, according to the Georgia Bureau of Investigation’s online database. Akins said that most of the sexual assault cases they deal with are at residential homes where there are incidents of child molestation or incest.

“I think a lot of times when you see the increases it’s just because people are more willing to report incidents when they happen and that’s a good thing. It makes the data look like you have more of a problem than sometimes you really do,” Akins said. “There’s not the stigma in some people’s minds that there used to be.”

Felix hopes that the number of reported rapes rise because that doesn’t necessarily mean that more rapes are occurring, it means that more victims are taking the time to report the assault.

Russell said that most rapes in the area are committed by someone the victim knows instead of a stranger grabbing a victim off the street. Instead, many cases involve a break in the line of communication.

“The whole point is for guys no means no. A lot of this relies on very basic communication because there have been cases where there was very little communication and a lot of misread signals on both sides,” Russell said.

Sexual assault can and has occurred in various places across campus, Russell said. This type of crime is more likely to occur in secluded areas such as a dorm room or a car.

Law enforcement insists that how far an investigation goes into a case of sexual assault hinges on how much the victim wants to pursue the case and how willing he or she is to see the case all the way through.

Felix volunteers with the Statesboro Regional Sexual Assault center, so she’s witnessed the emotional hardships victims must go through.

“I’ve personally have never seen somebody go all the way through [reporting an assault] in Statesboro just because so many people will stop at maybe the first or second step because it gets so hard with law enforcement. You have to understand it’s like they have to relive it twelve times,” Felix said.

The offender in these situations has due process both in the courts and at GSU, Russell said. Some alleged offenders could be suspended immediately while others may continue to go to class until a verdict is reached.

Russell said that men are capable of not consenting to sexual acts just as women are, however most of the cases he sees involve a male as the rapist or assaulter.

Felix pointed out that every year SASE hosts the Clothesline Project where victims of sexual assault can anonymously write on a t-shirt that is color-coded to match the type of abuse they endured. Felix suggested that this kind of event could more accurately reflect how many rapes have occurred at GSU versus the number of rapes reported to law enforcement.