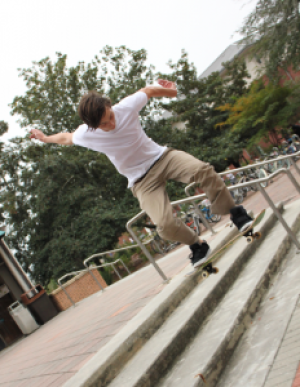 The ‘Boro Skatepark Project plans are in motion and will provide a location for skateboarders in Statesboro.

Collaboration between Phillip Stringer, project leader, and the Statesboro Parks and Recreation Department has led to plans to build a brand new skate park.

Along with the local authorities, the ‘Boro Skatepark Project has received grants from the Tony Hawk Foundation and Rob Dyrdek Foundation in order to fund this project, along with many others.

The Tony Hawk Foundation and the Rob Dyrdek Foundation both required an application submission.

The park will be a starter park, nothing too fancy, Stringer said, with about 10,000 square feet and an estimated $400,000 price tag. It is going to be professionally built by Team Paint Design, which is world-renowned in the skate park community, building about 3,400 parks worldwide.

The skateboarding community is growing in Statesboro, which is the main push for this park. Instead of skaters having to go around town finding a spot to grind on sidewalks and benches, there will be one central park for skaters.  There is also a social aspect to the park as well, which will help skaters meet others.

There are several options for the location of the new park, but one of the more realistic options would be at the empty swimming pools near the Parks and Recreation offices located on Fair Road across the street from Wendy’s and Zaxby’s.

The location is not set in stone and the main focus now is on just working on fundraising and spreading awareness, Stringer said.

The ‘Boro Skatepark Project holds a meeting every second Tuesday of every month in the Honey Bowen Building at 5 p.m.