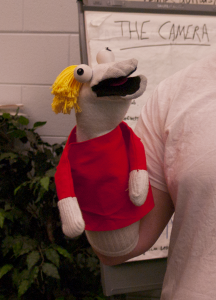 This Sunday, The George-Anne had the honor of getting to interview one of the stars of the upcoming play “Fuddy Meers.” Hinky Binky, a very special puppet, gave us insight into the daily life of a puppet and being a star of the show.

Tell us a little about yourself for students who have never heard of you.

“Well I’m Hinky Binky. I’m Catholic unlike my best friend Millet, Also unlike Millet I’m pretty awesome and smarter than the rest of the morons in prison. Oh, and I have a two-foot dinky.”

“It has its ins and outs. I never really get to change my hair much, but I don’t get hungry very often. I get the feeling a lot though that something is stuck up my ass.”

How’s the relationship with Millet?

“Well he’s an idiot but I love him, he’s my best friend. If it weren’t for me he never would have made it in prison.“

Some sources have said you can be a bit on the brash side. Care to elaborate?

“F- those guys. Tell them to bring it on, I don’t play around and no one gets in my way.”

What can you tell us about “Fuddy Meers”?

“Well it’s a pretty cool thing, it’s actually what that old crone Gertie calls the funny mirrors at the fair though. I don’t know why but I think she explains it at some point.”

Why do you think people should come see you perform?

“Why wouldn’t they? I mean I’m the s-! But it’s a great time and full of laughs. Between the stoner kid, Millet’s dumb-ass, lady forgets-a-lot, gimpy, strokey mcstroke, the red head cop, and of course your’s truly there’s not much of a dull moment.”

“Fuddy Meers” will be performed at the Black Box Theatre, the show opens Feb. 26 and runs through March 6, more details to come.