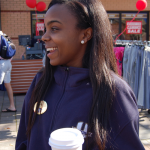 Rapper, Nicki Minaj recently landed in some hot water for using a historical picture of Malcolm X holding a rifle gun for her new single, Lookin’ A** N*gga.

In the song, Minaj clearly points out the other gender, calling them “Lookin’ A** N*ggas.” Her meaning behind those words meant that men (n*ggas) don’t mean anything, because they lie about everything like their money or their manly-hood.

Many people were very angry about her using the Malcolm X photo for her cover because it was a sign of disrespect.

Jada Brice sophomore, International Studies major said, “Because he was a man who fought for civil rights, I don’t think that that picture was the right one to use for her cover. A picture is worth a thousand words and she could have chosen a better one.”

Brice, said, “Something was going on with her for her to make that song and using the “N” word so many times can be offensive.”

“I love the song,” Evan Pope, Marketing major, junior said, “I believe that every verse in the song is true, but why use Malcolm X? The whole reason why she had the freedom to make the song was because of the path he paved for us.”

Pope said, “It’s kind of disrespectful but at the same time he is a man and he probably did the same dirt that is talked about in the song, but like I said before there are levels to this and she should have respected him.”

“Because Nicki Minaj is in the public eye and her being disrespectful like that is only going to tell the generation below us only pushes them further away from the civil rights movement,” said Pope.

Nicki Minaj is known for pushing the envelope when it comes to her songs and explicit lyrics. Some students agreed with her choice.

Angel Thornton, freshman, Early Childhood Education major said, “I think that it is her choice for her to use that picture, it is her song and I don’t see anything wrong with it.

Ta’Shon Grady, junior, Psychology major said, “I think she should have thought a little deeper before she chose that picture.”

“She obviously knew what she was doing,” Fred Thomas, junior, Computer Science major said, “She knew people were going to talk about it and using Malcolm X as the cover was going to get her publicity.”

Thomas said, “You shouldn’t put a positive role model and a negative song together; it’s only going to create negativity.”