Where does Southern stand? 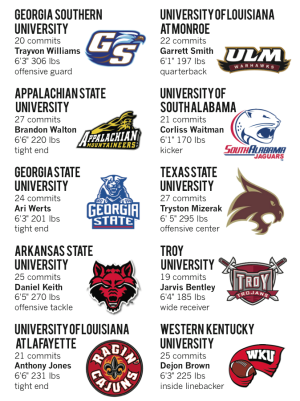 Head coach Willie Fritz seemed very pleased with the football recruiting class for the 2014 season, but the other Sun Belt Conference football teams proved to Georgia Southern University, through their recruiting classes, that this will be a tougher season.

Former Head Coach Jeff Monken was responsible for at least 10 of GSU’s 20 new recruits. Surprisingly, after a monumental win over the University of Florida, GSU doesn’t have as many “big name” recruits as one would expect.

This is something the Eagles may not see the effect of until next year’s signing class, or perhaps the win over Florida wasn’t as big as some may think.

GSU added 20 new players, with four of them ranked nationally by ESPN (all of which were three-star recruits). Last season, GSU was only able to recruit one nationally ranked player, so there was some improvement.

The upcoming football season will be GSU’s first season in the Sun Belt, right alongside rival App. State. This recruiting class is crucial for both of these teams in order to make an impressive statement coming into FBS football.

Georgia State University is not new to the Sun Belt, but now GSU and Ga. State are officially rivals. The Panthers were able to add 24 new players including eight nationally-ranked players, all of which were three-star recruits.

Both the Mountaineers and the Panthers added a nationally-ranked quarterback, multiple wide receivers, multiple running backs and other positions spread out across both sides of the field. The Eagles new recruiting class lacks in all of these areas.

Several of the Sun Belt teams are packing more “big name” power than the Eagles at this point, but there are a few teams that aren’t as strong. These teams are the University of Louisiana at Monroe and Troy University. Both of these teams are lacking in the number of signees and where the signees landed on the official rankings.

All of the football teams in the Sun Belt signed at least one player from a junior college, but Troy signed the most with 12 players. These players could help Troy in the upcoming year, but with only two years to play Troy is going to have to constantly rebuild in multiple areas on the field.

The Eagles signed six players from junior colleges and three of those players are filling the position of cornerback. In the signing day press conference Fritz mentioned that he felt there was an immediate need in the cornerback position. The question is whether or not there was a need for three players in this position that cannot play four years for the Eagles.

Outside of the recruiting class, the Eagles remain a strong football team, and, sooner than later, GSU will find out how successful this recruiting class will be for the upcoming season. The Sun Belt poses multiple threats with a new level of football, new opponents and new atmospheres. The Eagle nation has only six months and 19 days to find out how good this new team will perform in the 2014 season.