Eagles get stomped in Florida 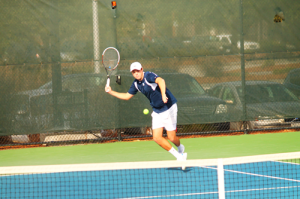 The University of Central Florida and Stetson University both had outstanding weekends when they each cruised to 7-0 victories over the Georgia Southern University men’s tennis team this weekend.

While GSU attempted to put up a good fight against UCF on Saturday, six dominating singles matches in favor of SU showed that the Eagles’ preparation was not enough for the Knights’ intense level of play.

One of the more challenging matches was GSU senior Oliver Webb against UCF senior Matthew Gladstone when Webb held Gladstone 6-2 in the first set. However, he ultimately lost the match when Gladstone came back to overcome Webb 6-2 and then 6-5 in the last set.

GSU junior Kyle Hoffman was also able to challenge his opponent, UCF freshman Chris Barrus, when they had two close sets of 6-5 and 6-4.

The doubles bracket was won after UCF junior Francesc Aulina and Gladstone paired up to take out GSU junior Albert Codina Sala and Webb with a win of 6-2. The Knights handily beat down the Eagles during their first tournament of the weekend.

GSU freshman Christian Kerrigan and SU junior Chester Espie had one of the closest matches of Sunday when they went 6-5 (7-5) and then 6-5 (11-9) to end it. Espie led the Hatters with the win.

Another close match was between Webb and SU junior Nathan Debut when Debut won the first set 6-3 while Webb came back defeating Debut in the second match 4-6, however ultimately losing the third 6-1. Another four matches in which the Eagles were defeated contributed towards the Hatters’ win of the singles bracket.

Eagles Racy and Hoffman paired up and put up a good fight against the Hatters’ Hans Adrian Riseng, senior, and Debut. After their first match ended with a score of 6-5, they then went into the tiebreaker with SU conclusively winning (8-6).Two close wins in the doubles bracket and all six wins in the singles lead to SU’s conquest of the tournament on Sunday.

The Eagles will look for their first win of the season this Friday when they visit East Carolina University at 2 p.m.