GSU jumps to sixth in SoCon 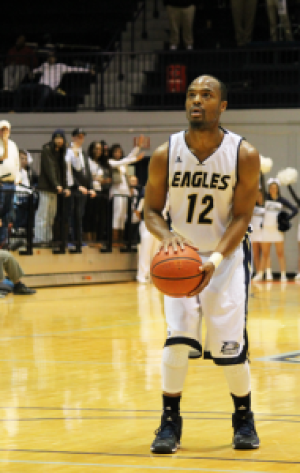 After losing three games straight in the span of seven days, Georgia Southern University has now won two consecutive games and jumped up a couple spots in the Southern Conference standings in the process.

An 83-52 waxing of The Citadel on Thursday followed by a 64-62 nail-biter against the University of North Carolina-Greensboro over the weekend has propelled the Eagles (11-12, 4-4 SoCon) into the sixth spot in the conference.

Before these two victories GSU was tied for eighth in the SoCon with Appalachian State University. This is the first time the team has won twice straight since Dec. 4 and Dec. 7. against Brewton-Parker College and South Carolina State University.

At this point in the season, it goes without saying that junior guard Jelani Hewitt is the focal point of the offense. But a main factor in this short spurt of success GSU has enjoyed is an increased balance on offense beyond Hewitt.

Thursday’s game vs. the Bulldogs saw four players score in double digits. Junior guard Curtis Diamond finished with 13 while senior guards Tre Bussey and Brian Holmes added 12 and 11 respectively. This was on top of Hewitt’s 22 points.

On Saturday, Hewitt’s effort at the free throw line vs. the Spartans was paramount to the Eagles victory. He put up 23 points (7-7 FT), boosting his season average to 20.4 points per game – best in the SoCon and 21st in the nation. But freshman forward Kyle Doyle was the game-changer with his season-high 13 points and 12 rebounds while Bussey pitched in 12 again.

When the Eagles can rely on the supporting characters around Hewitt to make shots, this team has a shot against anyone.

The other big reason why GSU has won two straight is that this under-sized team has over-achieved on the boards. The Eagles pulled down 43 rebounds against The Citadel and 39 against UNCG; which is more than they had in 12 out of 13 games prior.

Rebounding wasn’t the sole reason why GSU was able to squeak past UNCG – but it was the biggest. The team out-rebounded the Spartans 39-28; a great margin by itself. But, in a game that was decided by one basket, that statistic becomes monumental. Doyle’s 12 rebounds were the game high.

The Eagles have a lot of basketball left before the Southern Conference tournament begins on March 7, so they are not out of the woods yet. But if they keep up the style and efficiency of play that they have displayed over the last week, the team will have a good shot of securing a top half of the bracket seed.