Roadhouse: How a Texas native found a voice in Statesboro’s live music scene 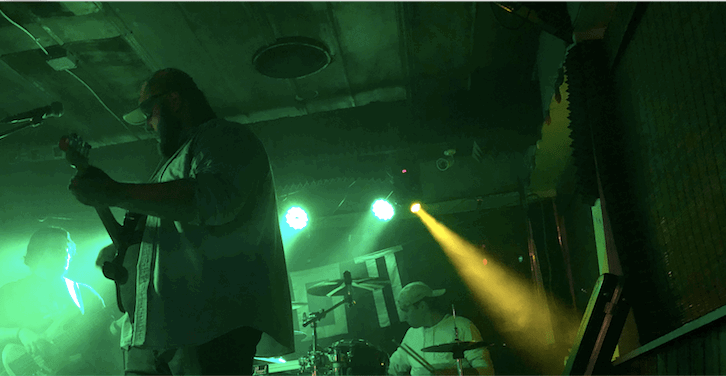 If you’re familiar with the live music scene of Statesboro, chances are you’ve heard Roadhouse perform.

Roadhouse, also known as Kyle Thomas, is a senior English major. He began performing in Statesboro in 2015. Now he plays regularly in popular Statesboro venues like Shenanigans and the Grove. Every Monday night you can find him hosting open mic night at Nonna Picci.

He first started performing in Statesboro at Locos.

“They used to hold an open mic, and I worked at the RAC, and basically one of my coworkers was just like ‘you’re going to go do this open mic, and we’re going to tell everyone in the building so you have to go,’” said Thomas. “And they did. She sent out a chain to all the different departments at the RAC and told all their employees, so I went to the open mic, and they packed the place out.”

Thomas had only planned on doing two or three songs that night, but with the successful start and heavy crowd, the manager told him to just keep going. That was his first gig. Two weeks later, Locos booked him again for a Thursday night.

“When I first started, the gigs were not consistent to say the least,” said Thomas. “I was only playing Locos, and occasionally I would get like Millhouse or something, but now they fall like water.”

Thomas found his love for music early on.

“I grew up on Texas red-dirt country and bad-ass rock-and-roll and the old alternative country guys like Turnpike Troubadours, the old Willie and Waylon,” Thomas said.

Thomas’ grandfather also serves as a curator for his music taste. “He used to play with a bunch of old Texas legends back in the day,” Thomas said. “He raised me up on Merle Haggard, Willie Nelson and Guy Clark, these old country songwriters, so I started getting into that.”

Thomas has also gained inspiration from bands who play locally around Statesboro like Maples Crown, Play of the Game and Fellas.

After he graduates, Thomas plans to move to either Nashville or Austin to give singing and songwriting a shot.

Thomas talked about some of the obstacles he’s overcome as he performs more live gigs around town.

“The main struggle is playing ‘Strawberry Wine’ every night,” Thomas said. “I’m just kidding. I really do hate that song, but it’s definitely not the biggest struggle. The biggest struggle has probably been that there’s just not much of a music scene here in Statesboro.”

The solution, Thomas believes, lies in both the artists and the general public.

“Most people here want to hear DJs, and I can’t really fault them for that, but I feel like if the bands can start putting out better product and recording things and getting them online to at least have something to build a fan-base around, and then the general patrons also do their part and come out to support, then I think we would build a live music scene around here,” said Thomas.

He said that creating a bigger live music scene could positively affect Statesboro and Georgia Southern.

“It would be a cool thing to have because, if you could get a solid reputation as a local music scene, you might draw more students here who are creative and that would help create and foster the music scene,” said Thomas. “You might get more bands, you may have more venues that can support live music.”

Thomas considers open-mic nights to be a very important part of any growing music community.

“I understand the prospect of going out and playing music for free is not super awesome to people who play music, but there are also a lot of people around here that have never played live before and don’t even know if it’s something they’re interested in, so these open mics are a great way to come out and do it,” Thomas said. “There are a lot of people out here that want to start a band, but they don’t know other musicians.

It was while hosting an open mic night that Thomas met the members of the group a little over a year ago. “They literally showed up one day with a drum set and a bass and said ‘hey, can we just back you up?’ And we started a band.”

This power trio, called Roadhouse and Company, performs together about two weekends a month. Thomas didn’t know either of the other members, Zach Futch, senior music major, and Tyler Tupper, junior business management major, until an open-mic night turned into an impromptu jam session. He said that’s even how their name came about.

“I didn’t know them, so I was just like ‘Hey guys, I’m Roadhouse.’ ” Thomas paused. “And Company, and it just kind of stuck.”

Thomas and his band don’t just play country music, even though most of his original songs are more rock or country blues.

“You will hear everything from Luke Combs. I don’t just look like him,” said Thomas. “I also play anything from Tom Petty, to Blackstreet, Dr. Dre, to Usher to Stevie Ray Vaughan; you’re going to hear everything.”

Thomas enjoys playing in the group because it gives him a chance to interact with the other members rather than just standing on stage singing by himself.