Walk-on to start on Sunday 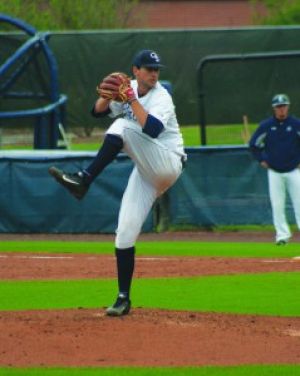 A transfer from Savannah College of Art and Design, who came to Georgia Southern

University more for a degree than to play baseball, will get his chance to shine on

Sophomore pitcher Ryan Frederick was a scholarship player. Now he is not. He was a

bag-boy at Harvey’s on Fair Road in order to pay the bills. Now he is not. He was a

guy who was lucky enough to make the team. Now, he will be toeing the rubber on

Opening Weekend in Athens against the Bulldogs in his first Division I start.

Craig Frederick, Ryan’s father, said that he had to get a job at Harvey’s just to pay

some bills because he did not have any scholarship money.

“It’s like our own Lifetime Channel movie,” Craig Frederick said. “Here’s a guy

Ryan Frederick pitched for SCAD before injuring his elbow. He had to get Tommy

John Surgery and in the subsequent months after, the school decided to cut the

baseball program. He decided to leave Savannah and come to Statesboro to pursue

a major in engineering.

coaches and they told him to try out in the fall. But Frederick had come to grips with

the fact that his baseball career may have been over if he did not make the team.

“He told me he was going to try to walk on. He said that if he did not make the team

then his baseball days would be over and he’d get his engineering degree,” Craig

But Hennon and pitching coach B.J. Green saw potential in Frederick and asked him

to join the squad. Hennon said that he is a high-energy guy who is always excited to

practice and comes to work with the right attitude.

He’s got a fastball that sits around the 88-90 MPH range and a solid changeup. In

threw were changeups according to his father.

“He always does the job, no matter where you put him. I could not be more proud,”