A look at the career of Jelani Hewitt 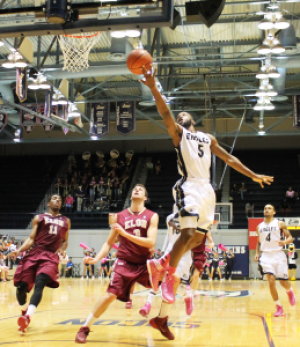 College has its ups and downs and Georgia Southern University guard Jelani Hewitt is a testament to that.

The 6’2” redshirt junior that hails from Miramar, Fl., has emerged this season as the top offensive weapon for the Eagles currently averaging a team-high 20.3 points per game.

Hewitt is leading the Southern Conference in scoring and is in the top 20 in scoring for Division I basketball, a list that includes over 350 schools.

Despite the accolades and attention that have been brought upon him due to his performance, he has remained humble.

“Hard work, my teammates, my family, guys staying on me and continuing to motivate me everyday, even now my guys still motivate me no matter if I score 20 points or 9 points”, Hewitt said.

Hewitt came to Statesboro as part of former GSU coach Charlton “C.Y.”  Young’s second recruiting class in 2010, where he made an immediate impact starting in 29 of the teams 32 games and averaging 9.5 points per game.

In his sophomore campaign he improved his scoring average to 10.5 points while once again making 29 starts.

However, he redshirted his junior year to get back on track and get things in order for himself.

“I took my junior year, sitting out as a blessing in disguise, it gave me to another year to get better and used it to work on my game and it worked out for me,” Hewitt said.

Coming out of high school he was known for his ability to score, as he averaged 26 points a game his senior year along with seven assists a game. However, it isn’t even the best facet of his game.

“I think my ability to get my teammates involved and I like the other end of it, I like to play defense and that’s the biggest part of the game, I love getting stops and playing defense and then it translates to offense, “ Hewitt said.

The transition between head coaches this season has not hindered Jelani despite the fact that he spent his first three years running a different system.

“Both those coaches are great coaches, it’s just different philosophies, I love the offenses and the system that is carried here,” Hewitt said.

So what’s next for Hewitt? He has become a member of the 1000-point club for his career and that’s not enough yet for him.

“Try and get 2000 points, probably want to get 200 steals, but that’s my next milestone,” Hewitt said