Under the spotlight: Long journey nearing its end for Thomas 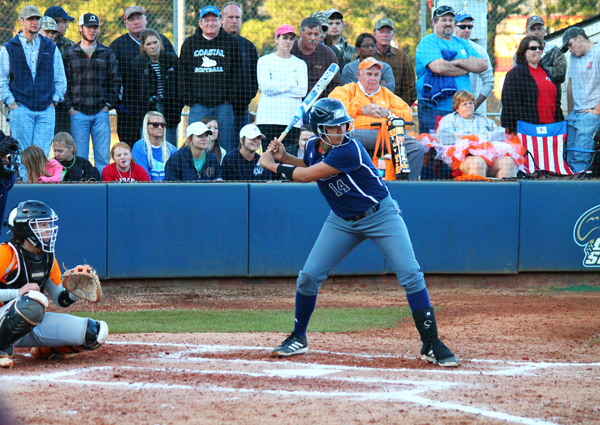 With her final season already underway, Kourtny Thomas has started 134 consecutive games for the Georgia Southern University softball team and she is eager to help them win their third straight Southern Conference championship.

Thomas played her high school ball at Houston County High in Warner Robins, Ga. She established herself by helping her team win four consecutive region championships and was twice voted to the GHSA All-State team.  She ended her senior season with a .370 batting average, six home runs and was named The Macon Telegraph All-Middle Georgia Softball Player of the Year.

“It was a great experience (at Houston county). It was a lot like my time here, I started with the same group of girls and we stayed together all through school,” Thomas said.

Since she was a sophomore Thomas went to every camp she could get into. She went to camps at schools such as Mercer University, the University of Georgia and Louisiana State University. After going on several recruiting trips she chose to play her college softball at the University of Tennessee.

At Tennessee, Thomas appeared in eight games for the Volunteers. By the end of the season she scored one run and recorded a .231 batting average on twelve at-bats. She ended up leaving Tennessee after completing a full academic year.

“I didn’t like the atmosphere there, I play softball for my teammates. It was a different experience there and so I decided to leave,” Thomas said.

After leaving, Thomas spent a year training with her father. She had to keep up her conditioning and challenged herself so she would be ready to join a new team.

“I knew I was coming here whether I got a scholarship or not. I knew a lot of people here and my brother lives here,” Thomas said.

The Eagles were ready for Thomas when she arrived. Her sophomore year she started in all 62 games at shortstop. She showed that she deserved the spot, ending the year with a .937 fielding percentage. At the plate she hit .186, totaled 26 RBIs and finished second on the team with seven home runs.

“It was a struggle getting back into the swing of things, I had only been practicing by myself for a full year. I was playing a new position than I did before, I’ve definitely gotten a lot better since then,” Thomas said.

Her junior season Thomas remained healthy and started the full 63 games for the Eagles.  Thomas was efficient at shortstop with a .967 fielding percentage. Her performance in the field coupled with a .254 batting average, 12 homers and a .486 slugging percentage earned Thomas All-SoCon honors.

After her outstanding performance in the 2013 season, Thomas was named to the Preseason All-SoCon team for her senior year.

Although it is still early in the season Thomas has made her presence felt. Through 25 at-bats she has a .360 average and is tied for first on the team with three home runs. With a fielding percentage of .968, she is poised to again make the All-SoCon team.

At this point Thomas has started every game since she enrolled at GSU. She looks forward, not to personal goals, but her team having a successful year.

“My only personal goal is to have a hit in every game, that way I can put our team in a good position to do well,” Thomas said.

After the vicissitudes of her career, through high school and two colleges, Thomas has two influences that have been a huge part of her life. First, she lists her father, who came home after full days of work to practice with her through the years between schools. She also listed her Bonare Middle School Athletic Director Ron Wilson who has followed her career from the beginning.

Upon graduation, Thomas hopes to work at a recreational department. She hopes to stay relatively close to home but hasn’t made any serious decisions. When asked about the possibility of softball being in her future she acknowledged the possibility of coaching.

“I would coach.  As far as playing I would probably just play slow pitch. But if I was asked to coach I would definitely do that,” Thomas said.