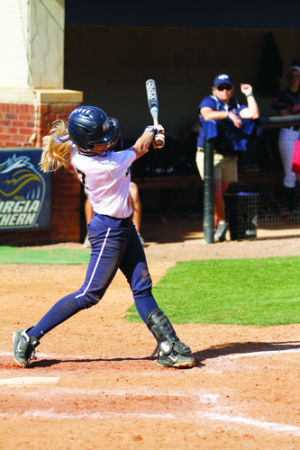 The Georgia Southern University softball team begins its season this weekend with the Eagle Round Robin. GSU will take on the University of Tennessee, Oakland University and Northern Colorado University.

With the possibility of being the first GSU softball team to win a third straight Southern Conference championship, the Eagles have been working in the offseason to prepare themselves for the possibly-historic season. The first tournament of the season will give them a good chance to gauge their off-season progression.

First up for the Eagles will be Oakland University. OU is looking to have a breakout year after only winning seven games throughout last season.

Their key player is all-conference senior Erika Polidori who managed a team-high .306 batting average and a .459 slugging percentage. Polidori was also elected to the Canadian national team.

They will field two All-Americans seniors Ellen Renfroe and Madison Shipman along with five other returning positional starters and three pitchers.

Northern Colorado University is the final team of the Round Robin. The Bears are coming off of a 16-30-1 season and will look to challenge GSU with their junior infielder Melissa Marcovecchio. Marcovecchio led the team with a .301 batting average and was named to the Big Sky All-Conference team.

GSU has high expectations this year largely based on the arm of senior pitcher Sarah Purvis. Purvis was elected to the first team All-SoCon and she is also a two-time SoCon Pitcher of the Year Award-winner boasting an ERA last season of 1.83. Purvis pitched two no-hitters and one perfect game last season.

Eagle Senior Shelby Morrill is returning this season after leading the team with a .340 batting average and was also named to the All-SoCon team.

The tournament will be held throughout the weekend on Eagle Field. The first matchup against Oakland University is on Friday at 5 p.m. Saturday will feature a double header starting at 2 p.m. against Tennessee followed by Oakland again at 4pm. On Sunday GSU will play Northern Colorado, with the final games to be announced.