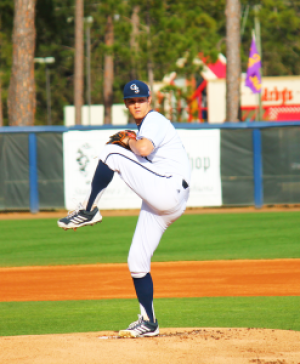 Four-game weekend series in a row, this time facing off against two teams: Ohio University and Southern Illinois University Edwardsville.

Last night’s game at Mercer University was cancelled due to rain, so this weekend will be the sixth straight home game for GSU. The Eagles (7-1) have won six straight and have a good chance to continue that streak through this weekend.

Head Coach Rodney Hennon said last week that the biggest difficulty in playing a four-game series was staying focused. That didn’t seem too difficult for the team seeing as they swept the University of Maryland Eastern Shore 4-0. But playing two different teams will call for more focus than just playing the same opponent.

GSU will face Ohio tomorrow, SIUE on Saturday and then a double-header on Sunday with SIUE being the first game.

The Bobcats are 2-4 this season. Stats can only tell part of the story this early in the year, but from what the numbers say, pitching is their weak link.

All four starters carry a 4.00 ERA or higher. They have given up 22 earned runs in eight appearances and have walked 17.

SIUE comes to Statesboro with a 1-6 record. They lose by an average of 7.5 runs per game and have a .230 team batting average. For anyone that doesn’t know what that means, just understand that it is bad.

Like Hennon said, staying focused enough to win four games in three days is difficult. But the Eagles did it last weekend and have a good shot at doing it again.

Baseball is a tricky game and anyone can beat anyone on a given day. But don’t be surprised if GSU ends the weekend with another sweep and an 11-1 record. If that happens, the Eagles will likely be ranked in the top 30 teams in the nation come Monday.