Over 100 staffers recognized for achievements 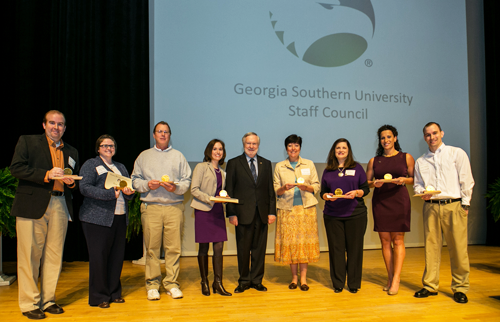 Courtesy of: GSU Office of Marketing

During the 2014 Staff Awards of Excellence Ceremony held in the Performing Arts Center at 10 a.m. on Tuesday 194 staff members were recognized.

Guests, recipients and nominees were welcomed to the ceremony by Marc Galvin of Eagle Dining Services on behalf of the Staff Council.

President Brooks Keel also gave a welcome speech as he joked about the snow days and the faculty’s unfamiliarity with harsh weather.

The Merit Awards, which faculty members qualify for by being nominated by their peers and presenting letters of recommendation, were the last to be given. These awards were presented by Patrick Robinson of the Staff Council.

There were 45 nominees for this award but only eight recipients.

Excerpts from their recommendation letters were read as the recipients were called to receive their award.

“I’m honored to be nominated alongside some great colleagues, and I’m humbled to receive it,” America Minc, Merit Award recipient and director of Campus Recreation & Intramurals, said.

Minc is a Georgia Southern University alumna and said that she has been honored to serve at her alma mater as a faculty member for six years.

Jaynie Gaskin, also a Merit Award recipient, is as a lab coordinator, working with instructors and in research labs.

Kasay said that she was very surprised to receive the award, and thankful to hear the kind words as her letter of recommendation was read.