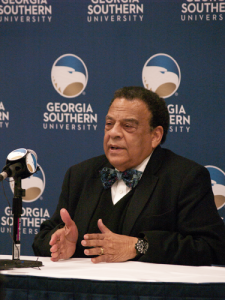 Young spoke of his time in politics, working alongside Martin Luther King, Jr., and the dream they both shared and how it has not yet been fulfilled.

“The world now expects to share the dream…we still have a challenge to make those dreams a reality for all of God’s children,” Young said.

Young kept his speech lighthearted, while talking on the significant progress being made and that to end poverty, jobs must be created.

“I thought it was very insightful, touched on a lot of good points about letting go of doubt and fear and just believing in your self,” Hamid Sanoko, junior sociology major, said.

The speech was kept simple, which was surprising with the resume and experiences Young has, Patrice Jackson, Dean of Students, said.

“For him to come and say ‘you know what, I live one day at a time, I figure out what I need to do today and tomorrow will take care of itself,’ I can appreciate that for myself, so I hope that our students appreciate that as well,” Jackson said.

Though there was an age difference between Young and the students, he was able to make his message relatable, making it easier for the students to receive, Dorsey Baldwin, director of the Multicultural Student Center, said.

The message that Stanford Thomas, sophomore international studies major, gained was that people of his generation need to realize how smart they are and that people need to understand what they are capable in their lives.

“I thought it was very insightful, touched on a lot of good points about letting go of doubt and fear and just believing in yourself,” Hamid Sanoko, junior sociology major, said.

Young emphasized that students should stick to their beliefs and take it one day at a time, while being true to themselves.

Young said, “Just enjoy life, enjoy even your problems, it’s a wonderful life and I probably had as many problems as anybody else, but I learned to live through them and learn from them”