Furman to take on GSU tonight 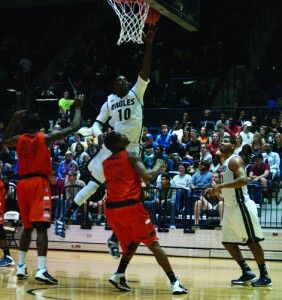 After losing a nail-biter on Saturday, Georgia Southern University will try to bounce back and reclaim a winning record in the Southern Conference today as Furman University rolls into town.

The Paladins (6-11, 0-4 SoCon) are losers of four straight and sit at the bottom of the SoCon totem pole.

Even though the Eagles (8-9, 1-1 SoCon) have fared better this season and are just one win away from a .500 record whereas the Paladins are five away, there are some noticeable similarities between the two teams.

Both teams seem almost too reliant on their top scorers. GSU with senior guard Tre Bussey and junior guard Jelani Hewitt, and Furman with sophomore guard Stephen Croone. Croone takes almost 25 percent of the Paladins shots meanwhile Bussey and Hewitt combine for over 50 percent of the Eagles shots.

Hewitt ranks 20th nationally in scoring with an average of 20.8 points per game. Bussey and Croone both average just less than 20 points per game as well.

During weekly radio show Inside Georgia Southern Basketball with Chris Blair on Tuesday night, Head Coach Mark Byington did not shy away from letting listeners know that Croone was the top priority for his team.

“He puts a lot of pressure on your defense. Not only can he score the ball, but one of the things I think he’s done great with is get to the free-throw line,” Byington said. “He’s talented. Keeping him off the free-throw line is probably going to be our number one game plan against him.”

If any of these players have a bad night offensively, the rest of the game will be an uphill battle for his team.

Both teams lack an identity in the paint.

GSU rarely works the ball down low to begin a possession. Senior forward Marvin Baynham is a talented rebounder and defender, but he does most of his offensive damage off of put-backs and second chance shots – not post-up opportunities.

Furman’s forward, six-foot, nine-inch sophomore Kendrec Ferrera, shoots at a high rate around the basket but ventures outside of the paint too often. He has put up 19 three-pointers so far this season and connected on just four.

Another key factor will be turnovers.

The Eagles have done a fine job forcing turnovers this season. They force almost 14 per game. If they can keep the ball under control on offense, the team will most likely win the turnover battle. And as they are going against a team that struggles to put up points, which bodes very well for GSU.

Furman doesn’t have a lot of viable scoring threats. They aren’t a team that is going to wow the crowd with a high-octane offense. Beyond Croone, the scoring is very balanced and spread out – but not in abundance. They average just 66.8 points per game, whereas GSU puts up 74.8.

The Eagles can improve its record to 2-1 in the conference and 9-9 overall with a win today. If the Eagles play consistent offense and take smart shots, they should not have a problem with Furman.

Tip-off is set for 7 p.m. in Hanner Fieldhouse.