Rocket Man to blast off in the PAC 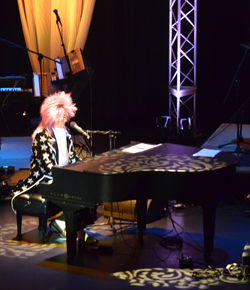 It all starts Friday night at Retriever’s Sports Bar & Grill where Tokyo Joe will be performing a concert.

The Elton John tribute show is this Saturday evening at 7:30. Tickets are $20 and can be purchased in the

Rocket Man is a tribute show, capturing the feelings of an Elton John concert. It replicates everything

from the outrageous costumes to the fantastic music. The show is put on by Tokyo Joe, a rock quartet

based out of Columbia, South Carolina.

“It is easily one of the best shows (if not the best) that will be in Statesboro this year,” Chandler

Dennard, the co-chair for the Rockin’ Out Alzheimer’s event said. “I’ve seen them perform the show

several times and I’ve seen the real Elton John in concert. You won’t be able to tell the difference. In our

Elton John is a world famous musician responsible for rock anthems such as Bennie and the Jets,

Crocodile Rock, Your Song, Tiny Dancer, Goodbye Yellow Brick Road, and many others. He also wrote the

music for the Disney Classic the Lion King.

All proceeds of the show will be donated to the Alzheimer’s Association.