ASA shows the beauty of where we all come from 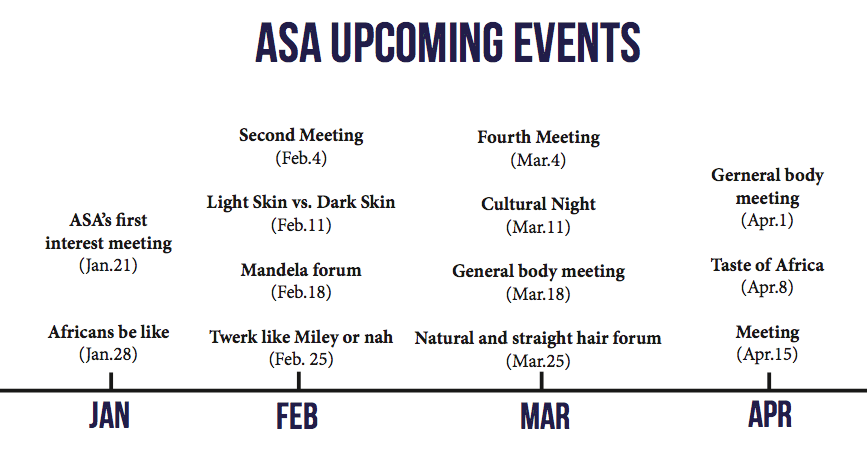 Learning about different backgrounds and cultures is always interesting and Georgia Southern University’s African Student Association is focused on doing so. Their first interest meeting will take place at 6:30pm in the Russell Union.

The ASA celebrates the beauty of that continent and their culture.

The ASA’s constitution was created about 20 years ago and still believes in bridging the cultural gap while building a better tomorrow.

In the past ASA has not been as active as they wanted to be but Chinonya Obialo, social chair and sophomore biology major said, “This year we are coming back stronger than ever.”

In rebuilding this organization, the ASA wants to reach out to many of the native African students and give them a “home away from home.”

The organization’s main objective is to educate and inform students about the influences of Africa.

“Look at early hip-hop, Simpson said, it had a lot of African pride, and the way we speak today—Ebonics– are influences of Africa. Ebonics comes from the word ebony, meaning black.”

Everyone has heard of mean and false stereotypes but the ASA plans on breaking many of the ones aimed at Africa.

Ugo Anikpe, vice president of the ASA and a sophomore psychology major, wants to inform people on knowing the truth about Africa.

“Africa is a developed continent and people need to know that,” Anikpe said.

Many might think that this organization is only for students descended from Africans, but everyone is welcomed to join. Different ethnicities and backgrounds will provide diversity and begin an end to the cultural gaps.

President of ASA said, “A lot of people don’t want to join because they think it’s only for African students but it really is for all types of people.”

Even though the basis of this organization is to educate students and bridge cultural gaps, bringing people together and having fun is also a part of ASA’s goal.

Different forums like Africans be Like, Light skin vs. Dark skin and Taste of Africa will take place, where students will get to meet different people and also learn facts about Africa.

The organization has events set up to go to other schools like the University of Georgia to show that Africa has a thriving heritage.

Members of ASA plan to reach out to through social media, fliers and word of mouth to make sure people get interested in the African Student Association.