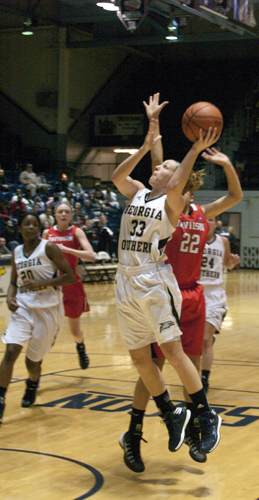 The sixth ranked Georgia Southern University women’s basketball team failed to pull off the upset against second ranked Davidson College 79-66 in the final game of their home stretch.

Two threes in a row from junior guard Anna Claire Knight and senior guard Mimi Dubose sparked life into the offense as they opened the game on a 10-4 run. The shots were followed by three pointers from, freshman guard Angel McGowan, and a second from Dubose.

Davidson refused to go down without a fight, they battled back by driving the lane and knocking down a three to fight back to only a four point deficit, 24-20. The game began to fall into a defense struggle with each team battling for points.

With the game knotted up at 26 points apiece Knight hit her second three of the night. The struggle for control continued with the Lady Eagles starting to pull away with two minutes left in the half 35-32. After multiple fouls from each team the half ended with GSU on top 38-36.

The start of the second half was a continuation of each team fighting for the lead. The Lady Eagles would put up points and immediately answered by the Wildcats. Davidson went on a short scoring run and began to pull away.

Eagle senior guard Lacie Dowling pulled up and drained a three to level out the score, but her team still trailed 54-49. McGowan helped swing momentum back with her second three-pointer of the night, but Davidson kept their shooting percentage high as they pulled away 67-58.

Knight continued to make her presence felt as she scored her third three of the night but was quickly answered by a long shot from Davidson. As the game wound to a close the Wildcats started to ignite and finished the game 79-66.

Head Coach Chris Vozab thought her team played physically but gave Davidson too many opportunities to organize the late comeback.

“I thought there were moments where we executed well, but we had a couple lapses defensively that gave Davidson a chance to stay in the game,” Vozab said.

Statistically the Eagles had a solid night with four players ending with double figures. Dubose ended her night with 17 points and four rebounds. Knight finished up with 19 points and six boards of her own. Spencer had a great defensive game with 11 total rebounds.

Dubose chose not to be hung up on the losing streak and focus her attention on the two game road trip the team will make next week.

“We have to take what we learned from tonight on the offensive and defensive game tonight and get ready for our games on the road,” Dubose said.

The Lady Eagles get to take a relaxing week off before they travel to Western Carolina University for their first of two road matches. The game is scheduled for 2 p.m. in Cullowhee, N.C.