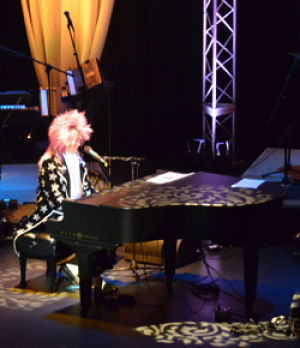 Tokyo Joe Production’s “Rocket Man” left the audience on a high note last night as they played at the Performing Arts Center.

The show paid homage to Sir Elton John in a way that was surprising for a show that was meant to replicate the sheer greatness of the rock legend. Shows that attempt to replicate artists can be either impressive or wrong, this was impressive.

Greg Bickley was a very impressive Elton.  His voice was eerily similar. He couldn’t rock the outrageous costumes as flawlessly, but no one but Elton can.

The show covered almost every notable Elton John song.  They even did a song from the Lion King, a movie Elton John did most of the music for, “The Circle of Life.”

The only minor disappointment was that “Your Song” was not sung live. It was, however, used in a very well-put-together video about what the night was really about, raising money for the Alzheimer’s Association.

The highlight of the night, by far, was the Crocodile Rock, in which people were standing up and dancing. The room filled with life as the classic and memorable song was played.

The lighting was also a highlight, it made it look and feel like a legitimate concert. The PAC proved to be a great place to have a live band.

The show wrapped up with Tokyo Joe performing some of their own music. They have a solid sound that mimics popular Rock N Roll artists of Elton’s time. Greg Bickley cracked a couple of jokes about Elton’s “Ridiculous Costumes” which kind of took away from the moment. If you’re going to impersonate greatness, don’t dis it.