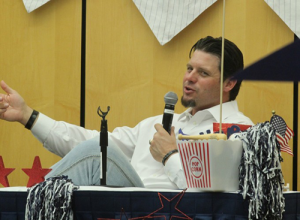 Local businesses and organizations had the chance on Saturday to listen to stories and advice from retired Major League Baseball All-Star Ryan Klesko at the annual Evening with the All-Stars.

The banquet is put on by the Georgia Southern Athletic Foundation in order to raise funds for the baseball team by selling tickets while hosting both a silent and live auction.

Klesko, a World Series champion with the 1995 Atlanta Braves, was joined by long-time MLB middle-infielder Scott Fletcher. Fletcher was an All-American shortstop at GSU in 1979 and played for legendary coach Jack Stallings. The pair spoke about their path to the pros and favorite moments along the way.

Klesko mentioned that he was unlike most kids growing up because his mother, not his father, taught him the game of baseball.

“She paid for fourteen years of hitting and pitching lessons,” Klesko said.

He went on to joke about how he would get voicemails from his mom and she would be critiquing his swing.

Fletcher, now an assistant hitting coach with the Braves, spoke a bit about how much more being a coach weighs on the mind than being a player. As a hitting coach, he said he has noticed that in every game there will be one guy with a bad night at the plate, so there’s always something negative that needs attention.

Klesko played off those comments when he offered advice to the Georgia Southern University baseball team in the room.

“When you’re going through slumps, you’ve got to have something to do to take your mind off of it,” Klesko said.

For Fletcher, it was relaxing in the hotel room all day. For Klesko, it was bow hunting. But he told the players that if they dwelled on their mistakes they will never be able to overcome them.

The first game of the year is in Athens as the Eagles take on the University of Georgia on Feb. 14.