Triple Option or Not? 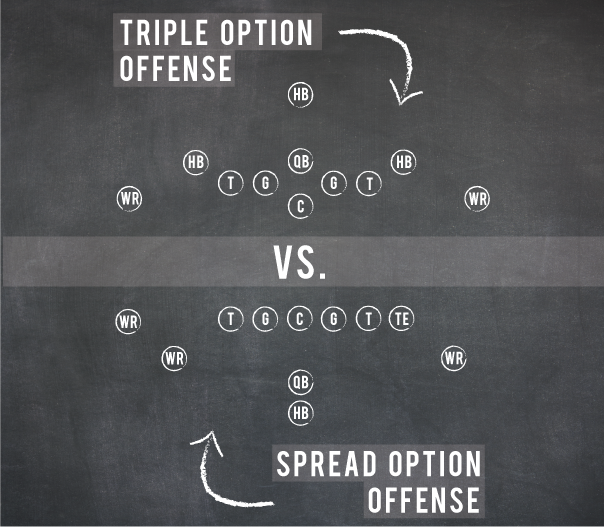 After the departure of Georgia Southern University’s former head football coach Jeff Monken, many have speculated whether the Eagles’ famed triple option offensive plays will be leaving as well.

Following the leave of former head football coach, Paul Johnson (1997-2001), none of his successors implemented a triple option offense the way Johnson did so successfully. That was until Monken accepted the position in 2010, signaling its return.

While Monken has had much success running his triple option offense—as he leaves the Eagles with an overall record of 38-16 under his belt—some believe that in recent years it has grown a bit tired.

Now that GSU is done awaiting the appointment of their new head coach, the Eagle Nation is curious to know what they can expect from Head Coach Willie Fritz in the near future.

Although no one is expecting Fritz to completely change up the traditions of GSU football, he will undoubtedly put his own signature style on things. For example, running a spread option offense, which is something Fritz had success with while coaching at Sam Houston State University for the past four seasons.

“We’re a triple-option type team. We do it a different way than what you have been doing here at Georgia Southern. We’re more a pistol-and-gun set and we’ve rushed for a lot of yards,” Fritz said. “We were the leading scoring offense in the FCS over the last three seasons, so we’re going to put points on the board.”

Lee Walker, a GSU alumni said, “I really like the triple option, but as long as the team is winning then I don’t really care what offense they run… So whatever the coach thinks is necessary and whatever he thinks they should do, should be done.”

However, the spread option is not limited to dropping back five yards and passing, even if that is most notably how it is executed. For the spread option to run smoothly, the team will rely greatly on its quarterback-to-wide-receiver completion ratio.

Seon Jones, a junior sports management major, said, “I like spread because you can utilize more players…everybody can get a chance to get their hands on the ball. So to me spread will out-do triple option any day.”

One of the most notable college football teams to successfully run a spread has to be the University of Oregon. With 3,789 passing yards this season they have the ability to make any of their opponents uncomfortable on any given play.

Not many teams in college constantly run a triple option. While a spread is more dependent on the ability to get the ball to the receivers, a triple option requires a variety of running backs or full backs ready for a hand-off or a pitch. GSU will have to start recruiting the type of players that have the ability to execute an acceptable spread in the upcoming seasons.

“I do believe we’ve got to have a great running attack and I have a very good background running the triple option,” Fritz said.

In the history of GSU’s football program, the Eagles have never boasted a 2,000-yard passer in a single season. Something that will most likely be worked on during their transition from a primarily triple option offensive setup to an offense that will certainly focus a bit more on its passing game for future seasons.

So the question is, triple option or not? The newly-crowned Fritz may need to incorporate a little bit of both as he tackles Georgia Southern University’s first season as a Sun Belt Conference team in the fall.

“I believe in a healthy mix of both, but you have to go towards his style of offense, because our triple option just doesn’t seem to work to me. It just doesn’t make sense to hardly pass in an entire game,” Brandon Street, Georgia Southern alum getting his second degree said.

“People aren’t as prepared for the triple option which helps us out in most situations, but I definitely think we should practice on our pass-game for the up-coming season,” Camden Batchelor, junior logistics major said.

“I really like the triple option, but as long as the team is winning then I don’t really care what offense they run. What’s important is how well they do and how much they win. So whatever the coach thinks is necessary and whatever he thinks they should do, should be done,” Lee Walker, a Georgia Southern alum class of ’89 said.

“I like spread because you can utilize more players. Everybody can get a chance to get their hands on the ball. So to me spread will out-do triple option any day,” Seon Jones, junior sports management major said.

“We’ll still have more passing built in by our formations, and scheme wise it’ll be more geared towards the ability to pass, but we’ll still have more run based play. I’m not for keeping the triple option,” Nick Parsicuia, Turf Manager for Football and Soccer said.

“Southern needs to run more of a shot-gun based triple option and give themselves more passing opportunities. If we want to keep running it, then we should run it how the Auburn offense runs theirs. I would like a balance between the two, keep up the triple option because that’s what they’re good at but it couldn’t hurt to practice converting to a spread,” Mitchell Roberson, sophomore.