Five reasons why you should go see an Evening with Groucho: 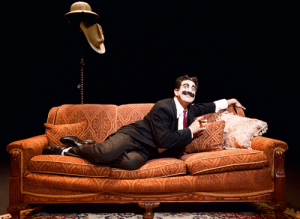 Saturday night at the Performing Arts Center, “An Evening with Groucho” is taking the stage. The show is at 7:30 p.m. Tickets can be purchased at the PAC box office for $10.

Who is Groucho? “He inspired so many comedians that students know and love today, such as Woody Allen, Bill Cosby, and Ricky Gervais. With all the pain and heartbreak that exists in the world today, it’s nice to know that we can go to the theatre and laugh and be healed a little bit by that,” Stacie McDaniel, the House Manager at the PAC, said.

He was the original hipster

A moustache and thick-framed glasses sound familiar? It should.

You already know his face

Think back to when you were a kid. Remember going to a toy store and seeing those thick-rimmed glasses with a nose attached and a thick moustache? That’s Groucho. “The popular ‘Groucho glasses’ were modeled after him – they’re the ones what have the big mustache, nose, and eyebrows all attached to a pair of round eyeglasses.” Explained McDaniel. Fulfill your inner child and go see where that profile came from. It’s famous for a reason!

His name is Groucho, so obviously he’s grouchy. No, this isn’t the original guy in the flesh but it’s still the same stuff he wrote. Who doesn’t enjoy watching people be grumpy? I mean sarcasm is basically considered a second language. With notable quotes like “I never forget a face, but in your case I’ll be glad to make an exception” it’s pretty obvious he’ll be dry and funny.

With the hit songs like “I’m against it,” a sarcastic tune poking fun at the IRS, his songs are pretty funny. Who doesn’t love a good wit-filled ballad? No, this isn’t a musical, but it involves music, which makes everything better.

This guy was edgy for his time, people couldn’t believe some of the things he said and did, and he was funny. Good comedy never loses its edge no matter how much time has passed, and this is no exception.  Look up some of his stuff on YouTube.

Photos courtesy of The PAC