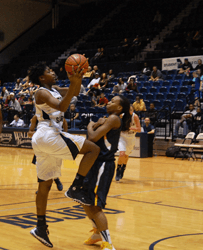 It was a rough winter break for the Georgia Southern University women’s basketball team (5-11, Southern Conference 2-2) as they lost four consecutive games and captured only one victory.

Following their first victory of the season the Lady Eagles fell into a four game losing streak, including losses against Detroit College and Florida Atlantic University in the FAU Thanksgiving Tournament.

Things started to turn around after the losing streak was snapped against Mercer University. The win vaulted the Lady Eagles into conference play against Furman University, where they dropped the first game of Southern Conference play 62-67.

A win against SoCon opponent Wofford College evened out the conference record heading into the winter break.

GSU started its conference stretch against the University of Tennessee at Chattanooga. Despite 16 points from senior guard Mimi Dubose the Mocs took the victory 60-69.

The fourth SoCon game of the season put the Lady Eagles against Samford University. Determined to come away with a win, senior guard Lacie Dowling and junior guard Anna Claire Knight both put 16-point performances. Their play ended up being enough to garner a late comeback, which resulted in their second conference win of the season, 64-61.

In Dubose’s eight-point showing she became only the 20th player in team history to score over 1,000 points in their career with plenty of time to add to her numbers.

Over the weekend the University of North Carolina at Greensboro arrived at Hanner Fieldhouse to displace the Eagles. After a 24-point performance by Knight, the Spartans fell 74-71.

“I think (this win) is a big deal, it’s always crucial to get home wins because it is so difficult to get wins on the road in this conference,” Dubose said.

Currently, the Lady Eagles are ranked fourth in the conference with a 3-2 record. Statistically they have started to improve but there is still plenty of room to expand. The team is currently being outscored by an average of nine points per game as well as averaging four more turnovers than their opponents in those games.

“I’m proud of the way we’ve been growing as a team and that’s something we are going to have to continue to do as conference games continue,” Chris Vozab, head coach of the women’s basketball team, said.